REPRESENATIVES from all aspects of community life in Ballon came together recently to honour retiring school principal Noel Heffernan.

The Cork native retires following 22 years at the helm of Ballon NS, which was a period of enormous growth for the school with an impressive four extensions overseen by Noel during his tenure. Prior to his years in Ballon, Noel was a teacher in Hackestown NS.

The evening to honour Noel was attended by teaching colleagues, members of the board of management, parents and the wider community as well as his family ‒ wife Noelle and daughter Orla. The couple’s other children Niamh and Paul are out of the country. 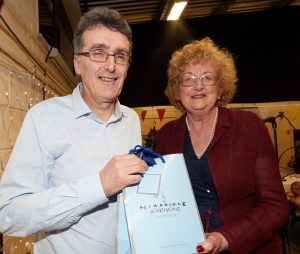 Máire George on behalf of the Ballon Improvement Group makes a presentation to Noel Heffernan, retiring principal of Ballon NS during his retirement party in the school
Photos: michaelorourkephotography.ie

Teacher Bernie Mullins spoke on behalf of the school staff and remarked that Noel will be very much missed, describing him as “enormously easy to work with”. Ms Mullins spoke of Noel’s supportive nature and his interest in ensuring the extra-curricular support of every child. “He really was always a teacher at heart,” she said.

Willie Byrne spoke on behalf of the board of management and outlined the huge growth in the school over the past two decades. He stated that Noel had overseen four school extensions, expanding enrolment numbers and physical size significantly.

Tracy Delaney representing Ballon NS parents’ association also thanked Noel for his support to parents and his dedicated work over the years.

Michael O’Toole representing Ballon Community Childcare, John Kelly on behalf of the local GAA club and Máire George from Ballon Improvement Group all spoke at the retirement function, outlining their experience of Noel’s unstinting support over the years. They all wished him well in his retirement.

Cllr John Murphy representing the local community thanked Noel for his years of service and remarked that he would be missed by all in Ballon. Fr Jim O’Connell, PP, Ballon/Rathoe also paid tribute to Noel for his years as principal and wished him well in this new phase of his life.

Noel thanked everyone for their kind words and remarked that he very much enjoyed every day of his 22 years in Ballon. He promised he would return for a visit and spoke of the wonderful support he had enjoyed over the years from staff, parents and the community of Ballon. Several presentations were then made to Noel.

The wonderful school choir added enormously to the retirement function, while refreshments were served afterwards, thanks to the parents’ association.

Mary Carroll has been appointed the new school principal of Ballon NS, having previously acted as principal in Kiltealy NS, Co Wexford.