THE chief executive of humanitarian aid agency Goal has thanked the hundreds of people from Co Carlow who took time out over Christmas to support the most vulnerable in our world.

Crowds at both St Laurence O’Toole Athletic Club and Palatine GFC celebrated the festive season by walking, running and jogging a mile for Goal. The Goal Mile in St Laurence O’Toole’s took place on Christmas Day and on St Stephen’s Day in Palatine GFC, while St Leo’s College hosted its own Goal Mile to raise funds for the charity before the school break on Tuesday 17 December. 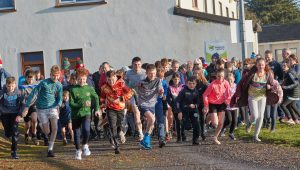 Now in its 38th year, the Goal Mile is one of Ireland’s largest and longest-running annual fundraising events. It is steeped in tradition for people who build in a Goal Mile as part of their Christmas routine.
“A huge thanks to Goal Mile organisers in Carlow and around Ireland for their support this year,” said Goal CEO Siobhan Walsh.
“Millions of euros have been raised to support Goal’s work in the developing world since the first Goal Mile was staged in 1982. The widespread support of the people of Ireland for the Goal Mile embodies the true spirit of Christmas. I would like to thank the thousands of people who started their Christmas Day by taking action to support others,” she added.

This year, more than 140 Goal Miles were organised all over Ireland. Goal Miles also took place in South Sudan, Texas, Poland, Sweden and with the defence forces in the Golan Heights.

Borris Ewe Breeders’ show will go ahead this Saturday