BRIAN Kirwan of St Laurence O’Toole’s AC was an excellent winner of the Carlow senior cross-country championships after running an fine tactical race in good conditions over the 10km course in Ballon on Sunday.

Kirwan, who took his sixth individual title after last winning in 2016, also led the O’Toole’s AC team to their 25th Odlum Cup.

In the absence of three-time winner and defending champion James McAssey, the stage was set for the most open contest for the title in recent years with Tinryland also affected by the late absence through injury on the day of the fancied Colin Payne. 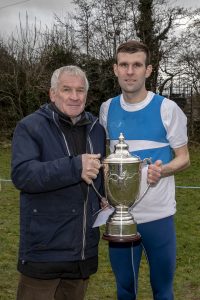 In the build-up to the race there was a tribute to former athletes and supporters of Carlow athletics who passed away in 2019 by county secretary PL Curran along with a presentation to multiple marathon runners Nicky Gordon (121 marathons) and Rock Pender (120 marathons).

For the men’s race 25 athletes representing O’Tooles AC, Tinryland and Bagenalstown took to the start line.

As the opening two-kilometre lap neared its conclusion, the battle for the highly coveted team title looked to be at its fiercest with Kirwan holding a narrow lead over club-mate and marathon specialist John Culhane and the evergreen 13-time winner Tommy Payne with a chasing group consisting of former multiple winner Pat Byrne, Larry Murphy and young O’Toole’s AC debutant Patrick McDonnell.

Over the following laps, Kirwan maintained a 100m lead over the chasing pack while it looked more apparent that O’Toole’s AC would retain the Odlum Cup with Trevor Corcoran and Niall Murphy both moving well up the field. Larry Murphy suffered an injury which left him unable to continue in the event.

As the race entered its final circuit, it was evident Kirwan had prepared sufficiently to regain his title and he was some 200m clear when crossing the finishing line in 37 minutes 16 seconds. The large crowd present were entertained to a fantastic battle for the podium places with Culhane having to draw on all his reserves to take silver in 37:51 with the fast finishing teenager McDonnell taking bronze in 37:57 ahead of the legendary Payne who showed he is still a force to be reckoned with at this level.

Along with the fine display from Kirwan, credit must also go to Culhane for a tenacious run to win his first individual medal and especially to the exciting McDonnell who is a very talented all-round sportsman having played for the Carlow minor footballers over the past year while also captaining Bagenalstown Gaels to the Carlow minor title.

In fifth position was Corcoran ahead of team-mate Murphy in sixth and while Tinryland’s Pat Byrne and Brian Payne finished seventh and eighth respectively, the winning O’Toole’s AC team was completed by the ever-dependable Ken Archbold in ninth.

The second-placed Tinryland team was completed by Padraig Webb in 10th, Tommy Payne Jnr in 11th and Eddie Walsh in 13th.

O’Tooles AC again were decisive winners of the team title on 26 points with Tinryland on 53 points.

The senior women’s event for the JJ Lambert Cup once again saw a depleted field in terms of numbers but this did not take away from a very keenly contested and entertaining four-kilometre event on the day. Although the destiny of the team title was decided in advance of the start, with O’Toole’s AC fielding the only complete team, with a solitary athlete from Ballon, the battle for individual honours was enthralling throughout.

In the end, it took a very brave and commanding run from Mary Clare Byrne of O’Toole’s AC to regain her title just ahead of Rosie Conway from the host club with Louise Oprea running solidly to take the bronze medal. The vastly experienced Brid Long ran well to finish fourth ahead of last year’s bronze medallist Maria Curran in fifth position.

After the event, the Odlum and JJ Lambert Cups were presented to the winning teams from O’Toole’s AC.

Great credit must go to the local officials and stewards in Ballon Rathoe AC, especially landowner James Hogan and Paul Hutton that ensured the course was well laid out and well marked and to all who helped out on the day with Eamonn Byrne a very capable MC for both races.