A WONDERFUL evening of music in memory of a much-loved local man raised vital funds for a very worthy cause recently.

Oh Night Divine was held just before Christmas in St Mary’s Church, Haymarket in memory of the late Paddy McDermott, Highfield, Carlow, who died in August 2019. Paddy’s family organised the concert in aid of St Monica’s Ward, St Vincent’s University Hospital, Dublin, a cause very close to their hearts, as Paddy was a patient there in the final eight months of his life.
Aged 65, Paddy had fought an ongoing battle with cancer since 2011 with great dignity, courage and his usual good humour. The exceptional care he received at St Vincent’s in his final months prompted the family to hold this special fundraising concert, with Paddy’s daughter, the gifted soprano Kathleen Nic Dhiarmada, among the headline performers. 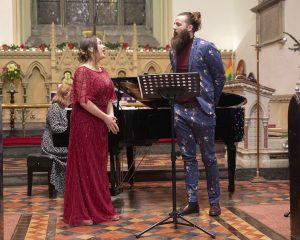 Kathleen was joined by fellow sopranos Aisling McCarthy and Helen May along with mezzo sopranos Sarah Kilcoyne and Emma Jungling, tenor Oisin Ó Dalaigh, baritone Andrew Johnston, pianist Aoife O’Sullivan and many more for an amazing evening of music.

Wonderful opera classics combined with festive favourites set a real Christmas flavour, while also supporting this very worthy cause.
Paddy was eldest in a family of seven children of the late Donal and Betty McDermott, who ran the family bar and grocery at 75/76 Tullow Street. He was a long-time member of Carlow Junior Chamber and served as president of that body in 1984, while in later years he was a prominent member of Carlow Lions Club, serving as president in 2017.