Working to breath new life into buildings and local communities

THE simple things in life are often the most important. People need friends and conversation and a place to meet. They need interesting pastimes and educational opportunities that are easily accessible in their locality.

Everyone likes to get out of the house for a few hours and come back energised. Carlow Development Partnership, through its Tús programme, has made these simple activities a reality for people living in rural locations. Throughout the county, many buildings are not being fully used. Tenants may have left or businesses have moved on, but gradually underused buildings fall into disrepair.

The partnership has worked with active community groups to scope out the potential of underused buildings in their villages with the goal of bringing about social, recreational and educational benefits for people of all ages.

Hacketstown is a good example of joined-up thinking working for the benefit of all. Local woman Mary Doyle has been at the centre of the developments around an underused community building. The property now leased to the community is called The Core and was originally the fire station. It had been a CRISP (Carlow Rural Information Services Provider) centre for some time. In early 2018, it was empty and Mary and other local volunteers, with the support of the development partnership, saw an opportunity and approached the county council with ideas for the building. Mary is delighted with the outcome.

“People know it as The Core. We went on our Hacketstown Community Group page on Facebook looking for a name and people came up with The Core. It is the first time that we have had an amenity like this in Hacketstown that is our own. It has had a great effect on the community. We are getting great feedback.

“People who were never mixing before are coming out to do courses now from yoga to gardening. There are people in The Core who previously never got involved in anything locally. It is fantastic to see.”

The county council agreed to lease the building to the community group and the people now have a space that caters for up to 20.

Public transport is a problem in Hacketstown. As one local put it, Carlow may as well be London ‒ there is no transport, even to Tullow. In the past, people would have had to travel to Carlow to avail of the opportunities that are now being provided locally. People can sometimes feel isolated and The Core has addressed that. The approach of the local community is to bring the facilities to the people now that they have a space. 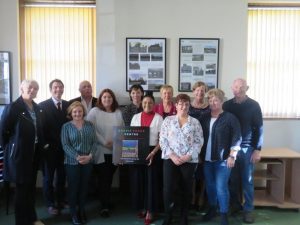 Today, there are homework classes for children, afternoon studies for all ages on a range of topics, a women’s group and an active retirement group, all co-ordinated by two Tús assistants, who are employed there from nine to five. In the evening, the room is available for hire and is used by groups such as the local first responders, who can also use it to store equipment.

“To get this in Hacketstown is major,” says Mary. “Anyone can use it. We are coming up to our second year and are delighted with what we have achieved so far. Only for Carlow Development Partnership, we wouldn’t be where we are. They worked with us to renovate the building, provided us with workers to keep the building open, provide regular interesting courses and rent the building themselves and that helps to keep us going. The courses were available to us in the past, but we didn’t have a place to hold them; now we do. People who used to sit at home now walk up to The Core ‒ that is huge success for the community.”

Mary added that there were plans to enhance the building, while the Tús workers, who keep The Core open, were a great asset to the community.

Marina De Costa is a Tús supervisor who was very involved in the development of The Core and a similar project in Borris. In both villages she knew there was no place to provide courses, or even mingle for a chat. In Borris, the library building was identified as a space that could work. Patsy Stapleton was the chairperson of the local community group and together Marina and Patsy set to work.

“The building was already being used for the library and the scouts. I got talking with Marina and we agreed that it was a shame to see the building not being used. She discussed the opportunity with her colleagues in Carlow Development Partnership and they were very enthusiastic and wanted to help. I worked with John Shortall, the librarian with Carlow County Council, who was also very helpful and got things moving to where we are now.”

The Borris Focus Centre is now a space that’s open for the community. It is a place where people can socialise and avail of the many free courses that are on offer. There are craft courses, yoga and a very active women’s group. There are many starter courses where people can sample the subject matter and decide whether they would like to take it to a higher level.

Marina points out that people are now doing courses which they would not have participated in if they were held in Carlow or Kilkenny because of the lack of transport. “It was badly needed,” she said.

Similar to the Core building in Hacketstown, the Focus Centre in Borris is run by Tús workers. Marina said: “We would not be able to open the space to the community without Tús workers. And an added benefit is that the increased footfall has been a great boost for the library as well.”

The unexpected consequences of community development give great encouragement to the people who spearhead the changes. Marina De Costa points out that she sees huge changes in the Tús participants, mostly people in their late 20s, whom she introduced as administrators in Borris and Hacketstown. They have grown hugely in confidence that they can get things done. Many of them now have taken a step forward by securing paid employment after a year on Tús.

As well as the support of Tús, Marina points out that the locals play a vital role. “We are fortunate in having two great community leaders in Patsy Stapleton and Mary Doyle. You have to understand that these were communities where there is high unemployment and fragmented service provision. The Tús programme provides a win-win scenario: a win for the Tús workers and also a win for the local community, who can now take part in activities on their doorstep.”

Working with communities such as Hacketstown and Borris is a strategic priority for Carlow Development Partnership in terms of combating rural decline, empowering communities to take ownership of assets and resources in their local communities, while all the time building community resilience.

Communities interested in renovating small community spaces in their locality are encouraged to contact Carlow County Development Partnership on 059 9720733.