CARLOW Youth Orchestra is to take part in a prestigious music festival in the National Concert Hall, Dublin, while also celebrating its milestone 30th anniversary.

Majella Swan originally set up Carlow Youth Orchestra in 1990 to give young instrumentalists the opportunity to play together and to experience some of the standard orchestral repertoire. Since its founding, the orchestra has gone from strength to strength, gaining a distinction from the Royal Irish Academy of Music and an achievement award from the Irish Association of Youth Orchestras (IAYO). 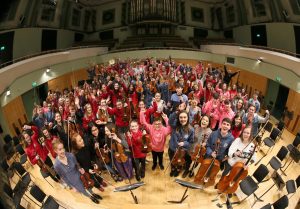 Members of the Carlow Youth Orchestra will perform at a prestigious concert in Dublin’s National Concert Hall
Photo: Mark Stedman

Now, it’s set to take part in the 25th festival of youth orchestras, which is presented by the IAYO on Saturday 8 February in the National Concert Hall. The festival is a significant milestone for IAYO and to mark the special occasion, they’ve established a special festival orchestra that features young musicians from across Ireland, including Carlow.