Gardaí honoured for bravery and dedication

DEDICATED members of the Carlow Garda District were honoured on Wednesday 18 December 2019 when they were presented with commendations for excellent police work over the last 12 months.

Acts of bravery and dedication to the people of Carlow were recounted by Chief Superintendent Dominic Hayes and Superintendent Aidan Brennan as certificates were awarded by the cllr John Pender, cathaoirleach of Carlow County Council, and mayor of Carlow Andrea Dalton. 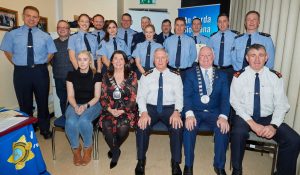 Supt Brennan got proceedings underway at the station and said the commendations were about acknowledging the good work being done by gardaí on the ground.

“There have been marvellous detections and results in the courts during the year, but some tragedies as well. Every phone call we get, there is somebody in need,” he said.

Chief Supt Hayes spoke about the importance of building relationships locally and how the National Ploughing Championships helped that objective.

The cathaoirleach and the mayor addressed the recipients and thanked them for their dedication to the people of Carlow over the past 12 months. They both reiterated the importance of building relationships and partnerships locally. Mayor Dalton congratulated Sergeant Conor Egan and his team in the Community Policing Unit for the positive impact they have had over the past 12 months.