THEY got the thrills and they were multiplying in Tyndall College when the students and teachers staged their first-ever school musical recently!

The talented teenagers chose the classic musical Grease as their first foray into big stage productions and they were suitably thrilled with the resulting work.

“It was a fabulous experience for everyone involved, but especially for the students,” said teacher Marie Clare O’Boyle. “It brings out the best in people, their talents and skills.” 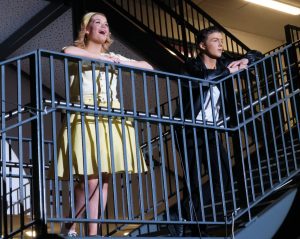 Sophie Broderick was simply fabulous as Sandy, while Calum Fisher made all the girls swoon as the cool love-interest Danny. Second-year and transition-year students made up the cast of T-Birds and Pink Ladies and over the three nights of the show they were hugely enjoyed by eager audiences.

The musical was produced and directed by Mairéad Mulhall, with Adrian Doyle, Aisling Phelan and Maria Quinn as musical directors. Stage and props manager Brian Mulhall ensured that the school’s facilities, which were just officially opened two weeks ago, were made full use of!

“It’s the beginning of the Tyndall College musical, so it’s the start of a new era for us here,” said Marie Claire.