“IT’S BEEN a long journey for me to the Dáil, but I’ve a passion for politics and a huge passion for Carlow … I won’t let the people of Carlow down.”

It was a case of third time lucky for a triumphant and emotional Jennifer Murnane O’Connor yesterday (Monday), when she took the fourth seat in the Carlow/Kilkenny constituency. Now one of the 33rd Dáil’s newest deputies, she also holds the distinction of being one of the only Fianna Fáil candidates in the country to increase their vote since the last general election.

Jennifer Murnane O’Connor secured 9,351 first preference votes at the weekend, an increase from 8,373 in 2016, when she was bitterly disappointed to lose out in the final count. The mood was utterly different this time around among Fianna Fáil supporters in Carlow, with jubilant scenes and tears of joy as Jennifer was held aloft at the count centre in the Lyrath Hotel, Kilkenny.

“I’m so thrilled and I suppose I’m thinking of my father now, he’d have been so proud … to my family and all my team, I want to thank them from the bottom of my heart,” a tearful Jennifer said, referring to her late father, cllr Jimmy Murnane.

It was a day of heartbreak for Fine Gael’s Pat Deering, who lost his seat on the seventh count, ending two consecutive terms and a total of nine years in the Dáil. Despite east Carlow and Pat’s home turf returning to the Carlow/Kilkenny constituency this time, a poor showing for Fine Gael nationally reflected in his vote. 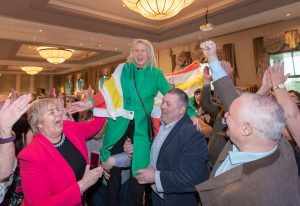 Jennifer Murnane O’Connor is lifted shoulder high by her supporters after her election in the count centre at the Lyrath Hotel, Kilkenny yesterday (Monday) morning
Photo: michaelorourkephoto.ie

The cruel nature of politics was evident in the mood among Pat’s family and supporters, many shedding tears in the early hours of Monday morning.

“We didn’t win today,” Pat reflected philosophically. “Change seemed to resonate a lot with people and we’ll see what change really means … if it means anything at all,” he added.

The day and the entire election, however, belonged to Sinn Féin, with a phenomenal first preference total of 17,493 votes for Kathleen Funchion, the party’s only candidate in this constituency. Right across Co Carlow, in every single box from every single polling station, Kathleen Funchion performed strongly ‒ an absolute sea change to the party’s poor showing just nine months ago in the local elections.

“I have been running since 2007 in elections, getting 2,500 first preference votes on the first occasion. I never thought I would ever see a Sinn Féin TD here,” said an emotional and overwhelmed deputy Funchion.

She said that “regardless of where a TD was from, people realised that if they voted for Fianna Fáil or Fine Gael they were going to get more of the same”.

On Monday morning on the eighth count, both John Paul Phelan (FG) and Jennifer Murnane O’Connor booked their places in the 33rd Dáil.

As Monday progressed, the twists and turns of an election count intensified to nail-biting drama as Fianna Fáil’s deputy Bobby Aylward and the Green Party’s Malcom Noonan battled for the fifth and final seat.

Early tallies on Sunday had cautiously predicted a possible three seats for Fianna Fáil, but with 37% of the vote, it was always going to be a tall order. And so it came to pass, with Kilkenny councillor Malcom Noonan gaining momentum from transfers as the count progressed, capitalising on this election’s left-wing surge with gains from Funchion’s surplus and, critically, cllr Adrienne Wallace of People Before Profit (PBP).

The Green Party joyfully rode this crest of a wave, thrilled and elated to regain a seat in Carlow/Kilkenny, which was last held by Carlow’s Mary White in 2011.

It was mixed fortunes for the other Carlow-based candidates, with cllr Adrienne Wallace (PBP) on 1,558 first preferences, Carrigduff’s Helena Byrne for Renua Ireland with 992 first preference votes, Labour’s cllr Denis Hynes from Ballyellen on 2,208 in the first count, and Independent Angela Ray from Carlow town polling 214.