THERE was a lovely event in Carlow Men’s Shed recently when the family of a deceased member presented the group with a cheque as a token of their appreciation.

Martin Shaw from Roncalli Place sadly passed away in December 2017, but not before he got to thoroughly appreciate his time with the men’s shed. There, with the encouragement of the other members, Martin rediscovered his love of wood-turning, while also forming a close bond with them.

“My dad was a lovely bloke and the lads there looked after him. He absolutely loved the men’s shed,” Kevin, Martin’s son, told Around Carlow Town. 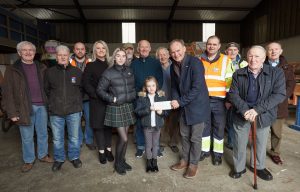 Sophia Moore the great granddaughter of the late Martin Shaw gives a generous donation on behalf of Martins family to Wayne Fennell of Carlow Mens Shed.The donation is in recognition of both the contribution the Carlow Mens Shed makes to the the Carlow community and to thank them for providing Mr Shaw with a renewed interest in his woodturning skills towards the later part of his life. Photo: michaelorourkephotography.ie

“We wanted to recognise their contribution to the community as well as how well they looked after him. It gave him a whole new interest in life.”

Kevin and some members of the Shaw family visited the organisation, which is based on the O’Brien Road, to present them with a cheque for €1,000 as a token of their appreciation. Martin’s great-granddaughter Sophie Farrell Moore made the presentation to Wayne Fennell and the boys while they, in turn, gave Sophie a gorgeous buddy bench they made especially for her.

The Shaw family members were very moved by the poignant event and Kevin would encourage anyone to go along and check out the work that the men do.

“There’s great camaraderie among the men and they really look out for one another. I’d recommend anyone to go along and see what they do,” concluded Kevin.

Carlow Men’s Shed is open every Tuesday, Wednesday and Thursday from 10.30am to 2pm in Askea Business Park off the O’Brien Road.