Youngsters battle it out at CU schools quiz

It was a neck-and-neck race to the finish in both the senior and junior categories, with the under-11s going through several tie-breakers before the team from Scoil Diarmada, Castledermot was first over the finishing line. Next was Scoil Naomh Iosaf, Baltinglass, with Scoil Naomh Mhuire, Stratford-on-Slaney finishing third. 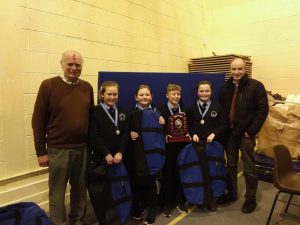 The quiz team from Scoil Diarmada, Castledermot scooped the first prize in the junior category of the Baltinglass and District Credit Union quiz. The winning team of Ella Kane, Molly Barcoe, Toirin Flood and Ciara Moody are pictured with
Seamie Dowling, a credit union volunteer, and their teacher Eoin Kirk

The two winning teams go forward to the next level of the national competition later this month, when they take part in the Chapter 7 round in Naas.