IT was a very successful weekend for Carlow Youth Darts as they held their first annual Challenge Cup at the Woodford Dolmen Hotel.

The Challenge Cup is a regular fundraiser on the youth darts circuit across the country and it made its first appearance in Carlow.

“We had a great weekend, we had 94 players on the doubles on Friday night, we had 18 teams on Saturday. Then we had a good turnout for the singles tournament too,” said one of the organisers, Paddy Cullen. 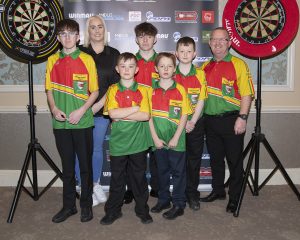 “Everyone was very impressed with how it was run so we were delighted. There is a big interest in darts in the county. When you see events like this, and they’re run well, it helps bring more interest.

“I met some people at one stage who didn’t realise darts was so big in Carlow so it was great. And it gives us a lift to know we can hold big events to promote Carlow darts,” added Cullen.

He was full of praise for the staff at the venue who accommodated them for the weekend.

“The Dolmen was absolutely brilliant. The staff were amazing. All weekend, anything we needed, they were at our beck and call. We couldn’t ask for more.”

He is now looking ahead to next year’s event.

“We’ll take a breath but we’ll sit down again as a committee in a couple of months and start planning for next year and look to try make it bigger and better.”