THE small but beautifully-formed Club d’Art in Pembroke was packed to the proverbials when local rockers Tumbling Dice played a gig for charity there.

Host for the evening was Club d’Art owner Bernard Jennings, the well-known optician, bon viveur and general man around town.

“We had a fantastic night, everyone enjoyed it,” said a delighted Bernard who, at one stage of the night, joined the band on stage to shake the maracas! Singer Olive Delaney also joined the lads on stage to cover a few Blondie numbers, while musician Gala Hutton did a few rounds on his guitar. 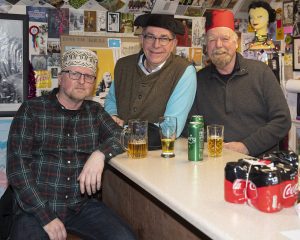 The night was a fundraiser for the Asanta eye care charity, which was set up by Bernard so that he could treat people in Kenya who may need it. He and travel writer Brendan Harding used to go to Africa for almost a decade but stopped five years ago before the political climate got too hot. Now Bernard is returning to Kenya with his son John along with optician Derville Pitcher from Dublin and Edel Power from Tipperary, who will assist them.

Over the 15-day-stay, they hope to see about 1,000 people for check-ups, diagnoses, procedures and referrals.

The Tumbling Dice gig raised an amazing €600 on the night, while he has also received funding from another eye-care charity that’s now defunct.

Bernard and his crew aren’t leaving for Africa until Sunday 5 April, so he has fitted in two more fundraisers before then. The next one is with the Carlow storytellers on Saturday 29 February, while a Mná na Trad night will take place the following Saturday.

The latter promises to be a who’s who in trad circles, but there’s one proviso: “if anyone want to play music on that night, they must be dressed as a woman!”, according to Bernard.