THE River Barrow hit the headlines in recent years over a proposed blueway, but the storied history is no less fascinating.

Historian Niall O’Brien recently presented a talk entitled ‘The Barrow navigation’ in McGrath Hall, Bagenalstown. More than 100 people attended the event, many of whom had family connections with the river.

Mr O’Brien recounted the history of the famous stretch of waterway, which extends 43 miles from below The Scars at St Mullins to the Horse Bridge at Athy. In 1759, the Dublin parliament authorised the building of 23 locks, 11 miles of lateral canals and 22 weirs on that part of the river.

Construction work began at St Mullins under Thomas Omer and John Semple in 1760 and was officially finished in 1832. The walkway cost around £200,000 to build, 60% of which was public money, with the rest from the Barrow Company shareholders.

The track was built between 1792 and 1820, but it wasn’t used solely for horses to pull boats. In the 1850s, Carlow gasworks placed gas pipelines along the route and in the 1890s cables were laid to carry electricity from Milford to Carlow town.

In the 1850s, the Barrow Company gave permission for a male auxiliary workhouse to be built in Graiguecullen and in 1839 gave £50 towards the construction of a new church for the Church of Ireland community in Bagenalstown. 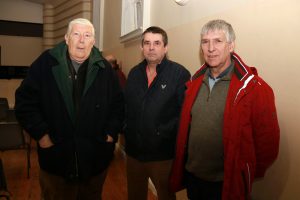 Keeping an eye on all of this trade were the lock keepers. They were paid £10 a year but were subjected to various financial penalties. Lock keepers worked from 7am to 10pm in the summer months and shorter hours in winter. A number of them were second- and third-generation in the job. Between 1850 and 1911, records show the Brennan family at Ballyellin lock, the Basset family at Ballytiglea, the Barron family at Borris and the Kellys at Ballinagrane lock.

About every second lock house between Athy and Milford had a stable or two for the trackway horses, while south of Milford nearly every lock had a stable.

Many directors of the Barrow Navigation Company were chiefly from the Colvill and La Touche families or their relations. William Colvill Snr (1737-1820) was an MP for Limavady and a successful corn merchant. He invested between £20,000 and £30,000 in the company. In the 1820s he was succeeded by his son William Colvill Jnr.

The La Touche family provided chairmen from the 1850s until 1893. In 1894, James Colvill arranged for the sale of the Barrow Company to the Grand Canal Company. Subsequently, James used his position as chairman of the Great Southern & Western Railway to start a trade war between the canals and the railways, which ended after James’s death in 1897.