TWO star-crossed kids made honest men of each other while raising funds for charity during Rag Week at IT Carlow.

IT chaplain Fr Martin Smyth conducted the ceremony, and his colourful attire was enough to bring tears to the eyes, let alone his colourful sermon.

The happy couple were then swished off by Carlow Cabs to a reception in some of the local pubs and were last seen living it up that evening. They made it last at the very least! 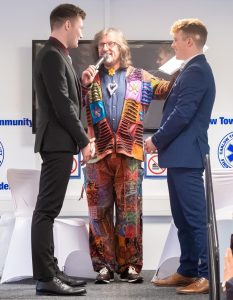 IT Carlow chaplain Fr Martin Smith looks on as Richard Nurney states his wedding vows to Patrick Hayden during the ‘Mock Wedding’ in the IT Carlow as part of Rag Week
Photos: michaelorourkephotography.ie

Rag Week events have been raising funds for three charities – Carlow Town First Responders, Carlow Mental Health Association and the World Wildlife Fund. It had been a tremendous Rag Week, with events set to meet a fundraising target of €15,000.

“On Monday evening, we had a bucket collection outside different pubs in town, which raised €1,000 alone in donations,” said Thomas Drury, IT Carlow Students’ Union president.

The big event of the week was Thursday night performance of Jenny Greene at Scraggs Alley and town was packed with revellers.

Your chance to shine a light on local heroes

Shining a light through troubled times