A BAGENALSTOWN company that specialises in dry-cleaning bridal gowns has just scooped a top award at this year’s Wedddingsonline Awards!

The Bridal Gown Cleaning Company was named as Ireland’s top dress cleaner at a recent awards ceremony in the Knightsbrook Hotel, Trim, Co Meath. Company director Stephen O’Connor and his crew of loyal staff went along to the ceremony, little knowing that they were about to scoop the award.

“This was the first year that we decided to go along and we won! We were delighted! The whole night was great craic, a bit like being at a wedding because there were so many stands and stalls at it. It was great fun,” said Suzanne Maher, the company’s marketing manager. 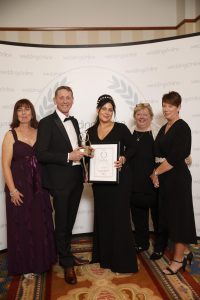 The company’s work is nationwide because it collects wedding dresses from the bride’s home, cleans it and delivers it back in special packing, all spruced up. Suzanne revealed that the most common stain demons on bridal gowns are false tan, heel marks and red wine.

She also said that many women are holding on to their dresses now and are not selling them on, preferring to keep them as mementos of their big day.

Stephen and the staff are delighted with their award and they would like to thank everyone who voted for them.

“We would like to thank all the local brides who took the time to vote for us. It is very much appreciated and we are over the moon to have received this award,” he said.

Your chance to shine a light on local heroes

Shining a light through troubled times