THE Woodford Dolmen Hotel in Carlow was the venue for The Nationalist Co Carlow Sports Stars Awards on Friday night where a huge crowd of over 260 guests came to celebrate the achievements of Carlow’s finest sports stars in 2019.

Sean Gannon was named Co Carlow Sports Person of the Year and earlier in the night the Éire Óg and Carlow player also picked up the Gaelic Football award following a year of stellar performances in the colours of both club and county.

In total there were 18 category award winners spanning a wide range of sports.

On a night when special guest Ray Houghton brought the house down with stories of his time as a player with Liverpool and Ireland, it was fitting that soccer was well represented in the list of awards.

The women’s soccer award went to Graiguecullen’s Kylie Murphy who captained Wexford Youths to victory in the Women’s FAI Cup, scoring in their final victory over Peamount United.

The men’s soccer award went to Pádraig Amond who starred for Newport County throughout their magnificent FA Cup run, scoring in every round including goals against Premier League sides Leicester City and Manchester City. He also powered his Welsh club to the League Two play-off final.

There was a magnificent reception for the Outstanding Achievement award winners from the Hanover Harps boys U15 soccer team who enjoyed a year to remember when winning the SFAI Cup. 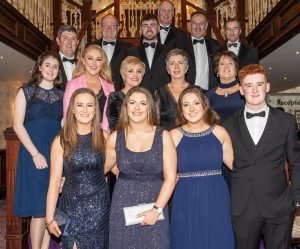 The rowing award winner was Clíodhna Nolan from Leighlinbridge who represented Ireland at the World U23 Rowing Championship in Florida last summer, while there was also a rowing Outstanding Achievement award for Sadhbh Scully and Keara Egan who won the Junior 18 double scull event at the national rowing championships and both rowers also went on to represent Ireland in 2019.

The motorsport award winner on the night was Richard Kearney who swept all before him last year, winning the Formula Sheane Northern Ireland Championship, Southern Championship and the Dunlop Trophy.

The darts award was won by Steve Lennon who excelled on the PDC tour, getting to the final of the World Cup of Darts in Hamburg in June, taking out many of the game’s biggest names along the way.

There were a host of Gaelic Games awards, alongside overall winner Sean Gannon.

The ladies football award went to Anne Roche who was massively influential in a great year for her Old Leighlin team while she also starred for the county team throughout the year.

The hurling award winner was St Mullins and Carlow talisman Marty Kavanagh who enjoyed many great days in 2019, including powering his club to the provincial club final.

The Setanta Award for contribution to Gaelic Games went to Fenagh club stalwart Michael O’Brien who has been instrumental in the continuing development of the club, particularly at underage level, while he has also had a huge influence in the administration of the game at various levels over the course of many years.

Michael was following in the footsteps of his father Pat, current Carlow GAA president, who is himself a former winner of the Setanta Award.

The rugby award winner was Ed Byrne who enjoyed another great year in the colours of Leinster in 2019, starring in the front row in Pro14 and European Champions Cup action, scoring tries along the way. 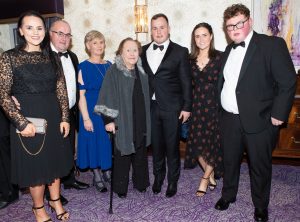 The athletics award went to Marcus Lawler in recognition of a year in which he won a bronze medal in the 200m at the World University Games in Italy in July.

There was also a Service to Sport award for athletics which was won by Denis Shannon. The Tinryland man has had a huge influence in the development of the sport in Carlow over the course of five decades and he continues to compete at masters level.

The showjumping award went to Jason Foley after a year in which the Ballyloughan man won the World Championship for Young Horses in Belgium.

There was an Outstanding Achievement award for the Borris Vocational School Open Equestrian Team of Catherine Kavanagh, Aoife Murphy, Claire Kavanagh, Patrick Doyle and Aine Kavanagh who won both the All-Ireland Inter-Schools Championship and the English National Senior Schools Championship at Hickstead. There was also a fantastic individual victory in England for Aoife Murphy.

A hugely popular attendee on Friday night was Mrs Maureen Mullins who represented her son Willie after a fantastic year in which Ireland’s champion trainer won the Cheltenham and Punchestown Gold Cups and the Irish Grand National among a host of other accolades.

The Hall of Fame inductee on the night was Michael Jackman, one of Carlow’s finest all-round sportsmen who starred for St Patrick’s Tullow and Carlow in Gaelic football before going on to have a great rugby career lining out for Co Carlow, Old Wesley, Leinster and Ireland B. Michael made the journey from his home in Los Angeles for the night and was joined by a large number of family and friends.

Ray was responsible for two of the most famous goals in the history of the sport in Ireland, one against England at the 1988 European Championship and one against Italy at the 1994 World Cup. He spoke eloquently about how sportspeople can get the best out of their talents and told some great stories about a fantastic era in Irish sport.