Army veteran Seamus is honoured for his lifetime of military service

SEAMUS Byrne, a Carlow man from JKL Avenue, was last week awarded a commemorative medal in recognition of 76 years of military service.

Seamus was presented with the medal for Frontline Emergency Security Services by his colleagues in the Post 29 Irish United Nations Veterans’ Association (IUNVA). Taoiseach Leo Varadkar also paid special tribute to Seamus in a letter that was read out by member John Kelly at a special reception in the Éire Óg clubhouse.

The event was attended by a large crowd of Seamus’s comrades from the Post 29 IUNVA and members of his family, where they were treated to a short biography of his long career in the armed forces. 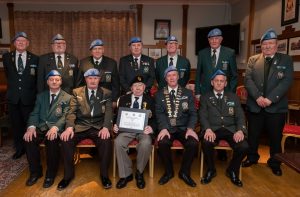 His military resumé began back in 1944 when he joined the No 1 Company, Local Defence Force (LDF), based in Burrin Street, Carlow. The first person he met when he went to sign up was Paddy Bolger. Seamus informed him that he was all of 16 years of age, whereas, in fact, he was a mere strip of a lad of 14! Little did Mr Bolger know that he’d still be serving 44 years later.

Seamus went to his first summer camp, held in Courtown, Co Wexford, in 1945 but soon afterwards the LDF was disbanded and replaced with the Fórsa Cosanta Áitiúil (FCÁ), to which Seamus signed up. He was a member of that organisation – locally called the 10th O’Hanrahan Battalion – from 1946 right up to 1990, when he retired with the rank of company sergeant.

He always enjoyed their annual summer camps and visited all the military barracks in Ireland. His time in the camps is among his fondest memories throughout his life.

But even after his retirement from the FCÁ after 44 years of service, he still hadn’t enough, so he immediately joined the Lt Kevin Leeson Branch of ONE (Organisation of Ex-Servicemen) in Carlow, of which he’s still a member.

Seamus also made lifelong friendships through his military service. He always enjoyed a drink with his great friend, the much-loved and late-lamented Jim Slattery, along with his other comrades and pals Hugh Kelly and Murt O’Leary. Indeed, the foursome were such stalwarts of Cis Carpenter’s pub on Barrack Street, Carlow that their usual table was always reserved with a sign for Dad’s Army!

Seamus, now 90 years’ old, has served a total of 76 years in the armed forces. He’s an associate member of IUNVA, whose members hold him in such high esteem that they organised the medal presentation for him in Éire Óg.

Seamus and the Byrne family would like to thank sincerely all those who organised the medal and the letter of recognition and anyone who helped out in any way.

Wallace tells employees to ‘walk out’ if working conditions are unsafe