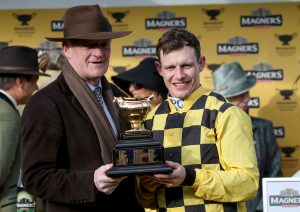 By Kieran Murphy
WILLIE Mullins created Cheltenham history as he trained Al Boum Photo to back-to-back victories in the Gold Cup last Friday.
In doing so, the trainer emulated the feat of Tom Moore who saddled L’Escargot (1970-71) to consecutive victories while Tom Dreaper (Arkle, 1964-66) and Henrietta Knight (Best Mate, 2002-04) have trained three-in-a-row successes.
Al Boum Photo also became the first horse since Kauto Star (2007, 2009) to win the race twice.
Ridden by Paul Townend, the 100/30 favourite gave his followers a white-knuckled ride. Hitting the front after jumping the last, Al Boum Photo held off the fast-finishing Santini to win by the narrowest of margins.
“We decided not to break a winning formula and just take the same preparation as he did last year. Don’t break a winning formula when it works and it’s paid off thankfully,” Mullins said.
“Paul was brave on him at the last. Paul’s plan came together and I’m delighted for him as well as [owners] Marie and Joe Donnelly, so I am just delighted.”
Mullins also hinted that the combination will be back looking for more success in 12 months’ time.
“I’m very happy with two (Gold Cups) and hopefully we are going to try for three. He loves Cheltenham and we’ll probably take the same route.”
The Gold Cup victory sealed an incredible four-timer for Mullins and Townend on Friday as the pair were named leading trainer and rider. It was a seventh trainer’s title for Mullins at the Festival.
Mullins saddled seven winners in total, four seconds and six thirds, winning the award on countback. Gordon Elliott had seven winners, four seconds, but only four thirds.
Mullins enjoyed a phenomenal day four with a 2,196/1 four-timer following the victories of Burning Victory (JCB Triumph Hurdle), Saint Roi (County Hurdle), Monkfish (Albert Bartlett Novices’ Hurdle) and Al Boum Photo.
His other winners were Ferny Hollow (Champion Bumper), Min (Ryanair Chase) and Concertista (Mares’ Novices’ Hurdle).
Mullins ends the meeting as the leading trainer of all time at Cheltenham with 72 winners.
“We went from a low to a high. Things went wrong the first day. We had no luck. It was better the second day. The third day was good and the fourth was absolutely amazing. An amazing week on all fronts,” said the champion trainer.