THE Bunclody Kilmyshall Drama Group showcased their entry to this year’s festival circuit recently in the FCJ concert hall.

The group ran its production of The Good Father to a packed house on the first of a three-night run at the local school.

Directed by Kieran Tyrrell, the show is an unlikely love story brought to life by actors Padraig D’arcy and Mairead Connaughton. It tells the story of how two people try to reach a new beginning. Tim and Jane are from different sides of the class divide. After a chance meeting at a New Year’s Eve party and against all the odds, they attempt to form a relationship. 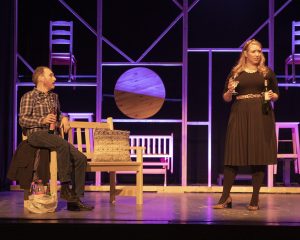 Pádraig D’Arcy as tIM AND Mairead Connaughton as Jane in the play The Good Father by Bunclody/Kilmyshall drama group.
Photo: Thomas Nolan Photography.

“It went down really well,” said Sinead O’Gorman of the drama group. “As one of the competitive plays that we have run in recent years, it will end up being one of most popular. It’s a lovely piece, very engaging from the start. There is plenty of wit and humour and the characters are very likeable.”

This play will go on the road for the upcoming festival circuit. It started in Gorey last week and eight shows will be staged through the month of March, including performances in Roscommon, Mayo, Cavan, Wicklow and Armagh.

It’s theatre’s own version of the Democratic Primaries, with the drama group vying for endorsements on the circuit to reach the all-Ireland Drama Festival in Athlone in May.

“It’s a huge undertaking for those involved. They are away 21 days in total. It’s a big commitment. They have focused on shows in the north and the competition is very stiff. They are undertaking eight shows, as you have a better chance of getting the three wins required that normally would qualify you for Athlone.”