PROCEEDS from this year’s Charlie Curran Memorial Run were presented to grateful recipients recently. The latest staging of the event, which takes place on the last Sunday of January, once again drew great crowds with 800 athletes taking part.

Around €11,000 was raised for the Irish Guide Dogs for the Blind and Brain Tumour Ireland and cheques were recently presented to representatives of both organisations in The Dome, Graiguecullen. 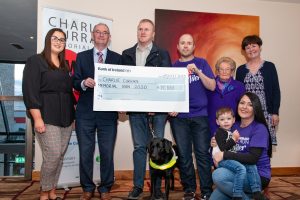 “It’s the nice to make that donation. It was our biggest year so far. We had the same numbers, but we were able to cut back on things to raise more money,” said organiser Charlie Curran Jnr.

The event is organised in memory of his dad Charlie Snr and has raised around €50,000 to date.

Charlie felt this year’s event was particularly important due to the impact of Covid-19 on street collections. It’s for this reason that he has also organised a virtual run in aid of the Irish Cancer Society, whose annual Daffodil Day appeal has been cancelled. Runners who had seen competitive events cancelled were invited to take part in the virtual run. With an admission of €12, participants were posted out a medal. The event raised over €300.

Charlie Jnr said it was fortunate that this year’s memorial run was able to go ahead, with a litany of similar events cancelled.

“We feel for every club and group that could not run their event. We were very lucky. Money has to go into these things to organise it.”