THE most prestigious art competition in the country for children and young people has been postponed because of Covid-19.

The annual Texaco Children’s Art Competition – now in its 66th year – has announced the decision to postpone the final judging, winners’ announcement and prize presentation of this year’s contest.

Bronagh Carron, marketing manager of Valero Energy Ltd (Texaco’s parent company), said that “the young artists throughout Ireland who submitted entries this year must wait a little longer before knowing who the 2020 winners will be.”

“Categorisation of the 25,820 entries received has been completed,” Bronagh explained. “Also completed is the preliminary judging process undertaken by an independent five-person panel of art specialists, who decide the shortlist of entries that go forward for final adjudication.”

The announcement of the top three entries in each of the seven age categories is usually held in mid-April, while the presentation of prizes normally takes place a month later.

The organisers said that they hope to proceed with the next stage of the competition – the final judgement – as soon as it’s safe.

‘We’re hopeful that we can proceed and bring our 66th Texaco Children’s Art Competition to completion as soon as those who are expert in these matters deem it safe to do so,’ the statement added. 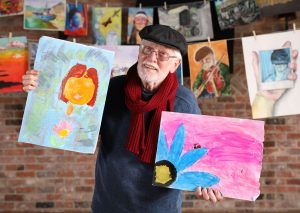