“The plexiglass is for customers and staff – it helps both sides,” explained Tommy Hickson, owner of Hickson’s SuperValu in Tullow. “When you are talking to people, you are going to be less than two metres, so it all helps.”

Hickson’s, like some other stores, have laid out signs on the floor to highlight social distancing in its queues.

“It’s going well. People just want to be shown, and when they see the spots on the floor to wait and queue they are embracing it,” said Mr Hickson. 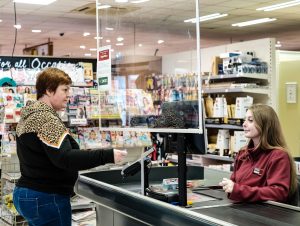 Mr Hickon noted there were not as many kids in the store due to fears that they were vectors of Covid-19. One shopper per trolley was increasingly the norm. “Some customers have to bring their kids because their husband or wife is working. They have no choice,” added Mr Hickson.

Elsewhere, Tesco in Carlow was limiting the number of shoppers in its store for a period of time over the weekend.

Mr Hickson noted that calm had returned to the public’s shopping habits following the rush of two weeks ago. Still, though, products like hand sanitisers sell out as soon as they hit the shelves.

“Two years of hand gel and sanitisers sold out in two days,” he recalled. “The biggest problem with supply of that is not so much the sanitiser but the packaging, which is coming from China! It’s a lot more calm this week. Stock levels are beginning to come back and we are getting there, if it stays calm. It has been a tough, tough two weeks on us all. Everyone has put their shoulders to the wheel.”

Many supermarkets in Carlow have implemented dedicated service hours for the elderly and the vulnerable. At Hickson’s, SuperValu has allocated every Friday between 8am and 11am to the elderly. Aldi and Lidl have implemented priority shopping hours for the elderly from 9am to 11am each day. Tesco has introduced a dedicated time to those over 65 up to 9am on Monday, Wednesday and Friday mornings. Dunnes Stores has introduced a shopping period for the vulnerable between 11am and 1pm daily. It has also asked people with children to avoid coming to the store at this time.

In Carlow town, SuperValu has dedicated hours between 8am and 10am every day.