A LOCAL family has been overwhelmed by the huge outpouring of support they’ve received as their son battles a very rare form of cancer in Germany.

Conor Woods (23), the eldest son of Pat and Ruth Woods, was diagnosed with medulloblastoma, an extremely rare brain tumour early this year. Conor had to undergo immediate brain surgery to have an aggressive tumour removed and now needs to spend the rest of this year receiving intensive treatment and recovering from this terrifying illness.

Conor is currently in Germany for nine weeks of proton beam therapy, which will then be followed by aggressive chemotherapy in Manchester.
In an effort to support Conor through this tough time, a family friend in Stradbally, Sharon Hope, started a GoFundme page last week and in just seven days the response has been incredible, with almost €15,000 raised. 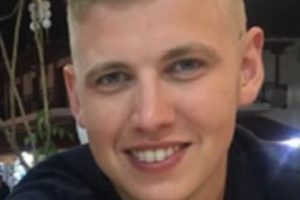 Conor Woods, who is being treated for a very rare form of cancer in Germany

“It’s overwhelming really, and emotional,” said Conor’s dad Pat, originally from Bennekerry, part of the Woods family who run the well-known Carlow cleaning contracting company. “Of course, with everything going on with this crisis, I know money is tight for a lot of people and they are fearful, so to have so many people donate is just unreal.

“Even the number of people texting and calling, I just want to thank everyone,” Pat added.

The Woods family live in Stradbally, Co Laois and prior to his diagnosis Conor was doing an apprenticeship in carpentry in Bolton, England, the hometown of his mother Ruth. Conor is the eldest of three, with brother Mark (21) travelling to England to be with him over the past few weeks and youngest brother Cian (12) a pupil in Ballylinan NS.

“Conor is a fit, healthy young lad who did the Dublin marathon last year and the two of us were planning to do this year’s marathon, but he was home here at Christmas and just didn’t feel well,” Pat explained to The Nationalist.

From November, Conor had been suffering from severe headaches and vomiting.

“He went to the doctor six times, but each time he was told it was migraine or sinus pain and given tablets, but the pain and vomiting got worse,” says Pat.

Conor returned to Bolton after Christmas, but in mid-January he suddenly collapsed and was rushed to A&E, then transferred to the specialist cancer hospital, Christie Hospital, Withington, Manchester for immediate treatment. He underwent brain surgery to have an aggressive tumour removed.

“It’s hard to believe this, but I was actually in Tallaght Hospital with my youngest son Cian, who had broken his arm earlier that day, when I got the call to say that Conor had collapsed and it was serious,” recalls Pat. “Myself and Ruth went over to Conor straight away that night.”

The tumour, which was pressing on the brain stem, was removed and a series of tests and biopsies followed, coming back with frightening results. The Woods family endured an extremely worrying time as doctors worked incredibly hard to establish the type of cancer Conor had and the best course of treatment.

“It’s a very unusual, rare form of cancer; it’s a childhood cancer, even though Conor is 23. They have told us they will need to treat the spine and the whole brain aggressively and they sent him for this pro-beam treatment in Germany. After nine weeks of that treatment, he’ll have 20 weeks of chemo,” explains Pat.

Conor and his parents were due to fly to Germany on St Patrick’s Day, but disruptions resulted in them travelling the following day instead. However, when they arrived at the airport, Pat was not allowed to go with them due to Covid-19 travel restrictions, and when they arrived in Germany Ruth was initially stopped from entering the country.

“Conor had a letter from the hospital saying he had to receive the treatment, then they weren’t going to let Ruth stay, but after a few hours and some calls they eventually did. Imagine him nine weeks on his own over there,” adds Pat.

Conor and Ruth will remain in Germany until the end of May, staying in accommodation on the grounds of the hospital outside Düsseldorf.

Throughout all of this, the Woods family have shown how incredibly close and supportive a unit they are. Conor, in particular, has faced all this with a positive attitude and his usual smile, showing concern for others despite his own worries.

“Conor is amazing; he’s in great spirits and is a really positive lad. He’s a private person and the kind of lad that just gets on with stuff,” smiles Pat. “The doctors are very positive and they’ve had good success from pro-beam treatment … the prognosis is good.

“It’s been a rollercoaster, but the support has been unreal; people have been brilliant.”