HUNDREDS of people recently took to the roads around Talbotstown, Kiltegan in a charity event in memory of Lucy Hayes, a mother of four who passed away from cancer in 2018. Lucy’s Run was organised by the parents’ council of Talbotstown NS, where Lucy’s four children Noah, Lilly, Donnacha and Charlie attend.

The run/walk was split into two optional lengths, either four kilometres or seven, which suited all abilities and ages. 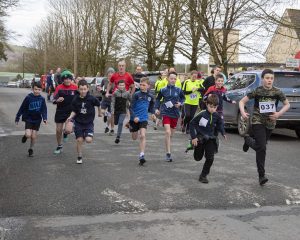 The start of the 7km run in Talbotstown

Lucy’s husband Denis said a few words of thanks to the assembled crowd, acknowledging all who helped organise the event, after which her four children released a balloon each. Lucy was a much-cherished member of the community who was the head chef in nearby St Patrick’s Missionary Society in Kiltegan.

Fittingly, the routes were marked with signposts with Lucy’s favourite recipes, while participants were also presented with specially engraved wooden spoons.

This is the second annual event in Lucy’s honour, with all proceeds going to the Irish Cancer Society and to Talbotstown National School.