‘Troublemakers’ bring the house down at fab fundraiser for Foróige

HILARITY, surprises and so much talent … even Donald Trump and Louis Walsh showed up!

It was all part of Rathvilly Foroige Junior’s recent variety night, with an incredible 12 acts giving their all in front of a packed audience at the local national school.

Rathvilly Foroige’s junior group welcomes children from ten years’ old up to when they finish primary school, meeting every Friday night in the local Phoenix Centre to chat, have fun, play games and take on all sorts of activities. The children call their group The Troublemakers, but according to one of their volunteer leaders, these Rathvilly kids are anything but!

“Every week they come and do something together, they really all get on so well, they’re fantastic children,” said Natalie Cassells, a volunteer with the group. “We meet every Friday from 6pm to 7.15pm and they play games like dodge ball or basketball, watch a movie or all do something together. 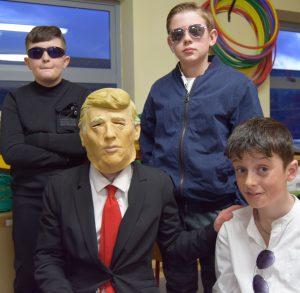 Watch out for these guys … (back) Ryan Gibson and Joshua Blackburn; (front) Brían Nolan as Donald Trump and Joseph Gibbons as Louis Walsh

“We have a really big group of 32 children at the moment and every year we plan to take them on a trip somewhere at the end of the year,” she explains. “This year we had planned to go to Tayto Park, but it’s really expensive to hire a bus and everything and we don’t like asking parents for money so we try to fundraise, so that’s what the variety show was for.”

The variety show welcomed a packed house with a terrific 12 acts taking part, from singers to musicians, comedy acts to magicians, ‘David Walliams’ to some questionable ladies … it was all there in Rathvilly!

“They were just super; they put so much work into it. The kids came up with all their own acts and, I’m telling ya, it was just so funny, they were brilliant! There definitely are some budding comedians there,” said Natalie.

There was also a raffle on the night with lots of prizes up for grabs.

“The community really came together to support us, so we had lots of prizes for the raffle. The night raised €1,000, which was amazing, so we are halfway there in our fundraising,” she adds.

The Foróige group has five dedicated volunteers, who are delighted to give their time every Friday night to support the community’s pre-teens. They are Elaine and Karen O’Brien, Lorraine Sheridan, Catherine Carroll and Natalie Cassells. And when life gets back to normal, they’ll be doing it again.

“We love doing it,” concluded Natalie.