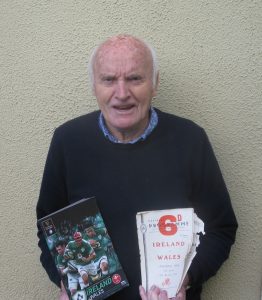 Every single season for the past 74 years, Vincent has travelled to support the Irish rugby team in their home international games. His attendance record stretches all the way back to when he enjoyed his first international rugby experience in 1947.
His devotion to the game has embraced all three of Ireland’s Grand Slams and nine of Ireland’s 11 Triple Crowns.
Since 1947 he has attended all but two of the home internationals, spring or autumn games. In one case he was in bed with flu and the other was a match in Belfast in the late 1940s. At that time Ireland’s home International games alternated between Dublin and Belfast.
Including autumn international games and about half a dozen away games, Vincent reckons he has been pitchside for Ireland between 230 and 240 times.
Initially he attended international matches as a Dublin-based student but for the past seven decades he has travelled to games from his home in Carlow where he had his career with the Irish Sugar Company and where he donned the colours of the local Carlow rugby club.
The seeds of Vincent Grogan’s love affair with the game began in Blackrock College in Dublin. At the age of 10 this single child left his family home in Gort, Co Galway to travel to Willow Park “because my father’s first cousin was the bursar there”.
“That first year in boarding school was tough. Even travelling by train to Dublin from Gort in the 1940s took most of a day.”
However, life in boarding school became a lot more enjoyable when his prowess at rugby got him involved in Junior and Senior Cup-winning sides. At college Vincent played in the back row of the scrum but in Carlow, where his speed was a rare and valued asset, he was promoted to centre or full-back.
In 1957 Vincent played for Carlow in a drawn Towns Cup final. For provincial players, the Towns Cup may be the Holy Grail but in Vincent’s life a more pressing matter led to him missing the replay: his wedding and honeymoon intervened. Carlow went on to win the replay beating Mullingar 9-3 but his marriage to Betty continued for 60 years till she passed away in 2017.
And for those 60 years Betty shared in his passion for rugby and accompanied him on the international outings. She also shared in his interest and loyalty to Carlow rugby and even today Vincent is a regular at Carlow’s home matches at Oakpark. However even after 60-plus years, team-mates from that 1957 cup-winning team still rag him about being absent for the replay.
Alongside rugby, Vincent was rising through the ranks with the Irish Sugar Company. “The 1970s was an exciting time for beet growing in Ireland as we welcomed the introduction of monogerm seed and specialist weed control sprays which cut a lot of labour from the crop,” he says.
This beet scientist abhorred the loss of the sugar growing and processing in Carlow. So much so that a couple of years ago he was part of a group that tried to resurrect the sugar beet industry for Ireland and for Carlow.
However he now believes that Brexit has delivered the final blow to any comeback for the beet crop.
For an Irish rugby international, Vincent Grogan’s matchday routine includes driving to the capital, a feat he still practises despite touching 90 years old.
What changes has he observed over the decades of watching the game of rugby?
“Today the game is a lot more professional. Management is a lot more switched on. There’s a lot more emphasis on training. Rule changes such as increasing the value of the try and allowing lifting in the lineouts are all positive.”
The buzz and excitement that Vincent gets from watching the men in green has not waned but some games stand out above all others.
“In 1964 I was in Twickenham when Ireland beat England 18-5. This was Mick Gibson’s first game for Ireland and we hadn’t won in England since the Grand Slam of 1948. Another absolute thrill was the 2007 game against England in Croke Park when Ireland romped home by 43-13.”
When Vincent Grogan was asked to name an Irish team populated with the greatest players he had watched he came up with the 15 names below.
“Some players such as Gibson, O’Driscoll, O’Connell, Kyle and McBride were easy to pick. In other positions you could argue and have a choice of candidates.”
Over the three quarters of a century of watching matches, Vincent has kept most of the match day tickets and programmes. “They are still on top of a press at home but I plan to go through them and put them in some sort of order and do some research on them.”
Along with former Carlow team-mate and rugby enthusiast Tommy Doyle, Vincent has compared the player profiles in very old matchday programmes with today’s. What has stood out is the size and weight of the modern rugby player versus his counterpart of 70 years ago. The comparisons are showing that today’s international players are on average 3.5 inches (9cm) taller and 3.5 stone (22kg) heavier.
So when Vincent attends matches today he gets to see a lot more rugby beefiness and heavy hitting for his entrance fee than he did when he set out to watch his first international 74 years ago.