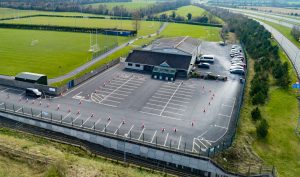 THE Tinryland Covid-19 test centre was closed for four days last week due to a shortage of testing kits. The drive-through facility at Tinryland GFC was shut on Tuesday, Wednesday, Saturday and Sunday. It reopened yesterday, Monday, but was expected to be closed today, Tuesday.

“The frustration is high at the minute among people. Things are organised and going smoothly and then there are no kits. It’s very, very frustrating,” said Tinryland GFC chairman Bernard Mullen. “The ladies would test 150 a day if they had the kits.”

The shortage of testing kits is a national, even international, issue. The demand for kits, Mr Mullen remarked, could not have been envisaged.

Last Thursday, the testing centre secured 80 test kits, but they had to be shared with other testing facilities. The centre was testing between 30 and 40 people a day when it was open last week. In the previous week, it had been around double that figure.

Tinryland GFC is providing security and stewarding for the drive-through facility, but Mr Mullen said it was hard to know how many volunteers are needed each day due to the supply of test kits. However, he refused to be downbeat and was hopeful that the country’s proactive measures, including movement restrictions and self-isolation, could flatten the curve.

“For all the negatives, there are plenty of positives,” he remarked.