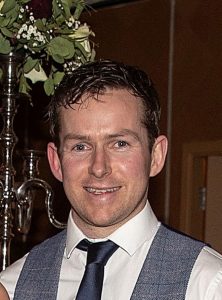 Sport: GAA/soccer
Club: St Patrick’s/Parkville
Earliest sporting memory: Field day sprints in Ballon around 1990 and getting ice-cream after the race.
Memorable sporting moments: Making posters for Italia 90 and USA 94. Winning Hurling Féile in Kildare with Dad managing. Playing in the Umbro Soccer Tournament in Manchester with Jim Farrell managing, Winning the U17 4x100m relay in Mosney with John Plant coaching, School sports with Tullow Community School with Padraig Cunnane, Paddy Quirke and Daithi Kenny coaching. Representing Carlow minor hurling and football. The adult memories go quicker but great memories with Burrin Celtic (they didn’t mind that I couldn’t train when away with the army!) then back to Parkville. Winning intermediate championship in 2005 and playing senior club football with St Patrick’s for six years. Winning junior hurling championship in 2009 and all the craic with club friends at trainings, trips and after games. Great memories training and playing with Carlow senior footballers.
Biggest influence on career: My parents who instilled a love of all sports from an early age and brought me all over the place!
Sporting Hero: Growing up there was only one, King Eric Cantona. His goal to win the double in 1996 is a great memory, as is that chip against Sunderland later the same year.
Most difficult opponent: Eoin Bradley gave me a tough time in Dr Cullen Park against Derry in the 2010 championship. There were a few other household names, but championship is where it counts! Marked Bernard Brogan in a challenge game in Newcastle one night. I played well, even though he scored 1-4! Chased Gooch around Croker when the Defence Forces played AIB too which is a nice memory.
If I could turn back the clock: I’d play one more game of football and go for pints after with Jamie Coady. A great talent and great craic too!
Your favourite holiday: Vietnam with my now fiancé Charlene. Travelled the full country over a month and sampled all that Vietnam has to offer. Cha even abseiled off a cliff into a cannon even though she is scared of heights and water! A few great lads holidays too including madness in Asia, South America and a few Greek Islands.
Memories outside sport: Growing up and getting into small bits of harmless trouble with the lads!
Favourite bar/restaurant: The Hurlers, Castletroy. Great spot on the way home from afternoon cinema during college in UL!
Three people you would bring to dinner (not family): Tommy Tiernan, Roy Keane and Stephen McGuire (I would make McGuire pay as it is always his turn!) We would have a great laugh!
What would be heaven for you: To kick the winning score against Kerry in a packed Croke Park on All-Ireland final day as Carlow lift the Sam Maguire!