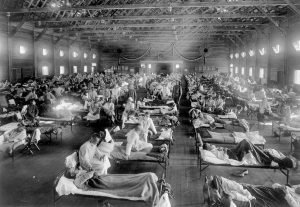 When the coronavirus disease emerged earlier this year from Wuhan in China, Carlow College lecturer Dr Ida Milne watched enthralled and gradually more horrified. Her special research area – and passion – is the 1918-19 influenza pandemic, which is conservatively estimated to have killed 23,000 Irish people, and more than 50 million worldwide. It probably infected about 800,000 on this island over 11 months between May 1918 and April 1919. Although influenza is a different disease to Covid-19, the social impacts already seem eerily familiar, as Dr Milne writes

THE 1918-19 influenza pandemic is seen as the ‘Big One’ against which all other emerging pandemics are measured. The 1968 Hong Kong influenza pandemic, which I experienced as a small child living near Strahart in north Wexford, killed much fewer, about 700,000 people.

Before the 1918 influenza pandemic arrived here, newspapers were warning that it was coming, as it spread rapidly around the world. People who had been children at the time told me that their parents huddled with other adults to discuss the damage they expected it to do in hushed tones, so as not to frighten the little ones, whose curiosity was so excited that they sought the answers in newspapers.

When it came, it silenced towns and villages, with some staying indoors because entire families had it, and others afraid to go out in case they caught it. Schools were closed early on, just like in this current pandemic, as then they thought children were ‘super-spreaders’, to use a modern term.

Court sittings were postponed, public buildings closed, games and concerts cancelled. Shops struggled to stay open and in business, suffering from staff illnesses and lack of footfall, as people were too ill to shop or stayed away to escape infection.

Hospitals were overwhelmed, turning most of their space over to wards. Take New Ross for example. At the end of October 1918, 300 flu sufferers were in hospital and 900 were ill at home. The same picture applied in all other towns in the southeast that week. Medical staff worked around the clock in hospitals and in the medical dispensaries. Medical dispensary doctors paid 100,000 extra home visits to flu suffers during the crisis.

But because of the sheer numbers, most people could not access – or did not need – professional medical care and were nursed by family and community groups at home. Soup kitchens were set up by voluntary groups to bring food to those too ill to get out of bed. Eye-witnesses told of long lines of hearses to the cemeteries, of church bells constantly tolling for funerals.

Young, previously-healthy adults were the unusual cohort who were badly affected by the 1918-19 influenza. Older people are more impacted in this disease, but the age profile seems to be changing and we all need to take care.

Newspapers carried accounts of sportspeople who were laid up with it, and some died. Joe Ross, Louth county footballer and cycling star, was one. The disease caused GAA matches to be postponed, which played a part in getting Wexford’s senior football team their important four-in-a-row All-Ireland record, as a promising Kildare team was under par because of flu in an earlier game, and in the final – played eventually in early 1919 – some of the best Tipperary players were sick. 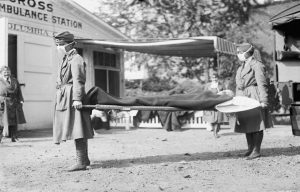 Since I came to work in Carlow College as European history lecturer 19 months ago, I have felt privileged to be asked to talk about it to local history societies in Carlow, Kilkenny, Wicklow and Waterford as well as Wexford. The audiences at these interactive talks tell of what happened in their communities, as normal life was paralysed by the disease.

The southeast – and Leinster in general – was particularly badly affected in the dreadful second wave of the flu in October and November 1918. Newspapers tell of the truly sad stories, where families died without help, as people just did not know about them until it was too late. One example was the Phelan family in Dublin’s Corporation Street, where neighbours noticed the family hadn’t been seen for several days. They broke into their tenement flat and discovered a couple, their baby and another family member in one bed, already dead or dying.

But in the Ireland of the 1910s, this was a relatively rare picture, as from every region I am told how people stepped in to help out the ill, even at risk to themselves. These accounts echo what is already happening now, as people move to protect the vulnerable.

In Graignamanagh, creamery workers went out to farms to milk cows when farming families became too ill to do it. A nine-year-old boy on a Carlow farm looked after his family and did all the farm jobs until the rest of the family got better. In Baltinglass, a person in the audience told a story that filled me with awe: his father and brother, then young men, went around the community keeping houses warm by collecting firewood, and cooked, cleaned and did messages for the ill, even to the extent of emptying chamber pots, in this era before many houses had flushing toilets. One person told me that the hospitals were so crammed that her grandmother was born on a makeshift bed on the floor of a psychiatric hospital.

These stories are on all our doorsteps. I grew up in Strahart in north Wexford. Our family friend and mentor Bab Davitt told me of her mother and aunt wanting to nurse a family ill with the flu – two had already died – who lived just a couple of hundred yards from their own home, where my mother lives now.

They walked three miles to Ferns to ask the parish priest whether he thought it was wise. He told them God would protect them. And, Bab said, he did, as their families did not catch the disease. The young women managed to save the rest of the family.

How familiar does the 1918-19 picture already sound, as history seems to mirror itself? 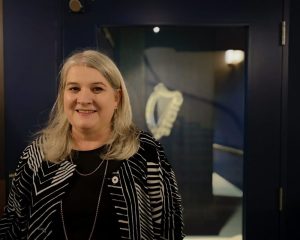 Currently, our medical professionals are working ingeniously, learning from their colleagues in Wuhan and Italy, drawing on engineers to help scale up machinery and barrier equipment, trying to figure out what drugs are in biggest supply and will work best.

The history of this will be fascinating. Right now, the rest of the population needs to stay away from one another to slow the spread and stop the crush on hospital services. We, too, need to act for the nation. Each one of us can be on the frontline to change things. Our futures depend on it. Economic recovery will come the quicker if we do.

We are learning a painful lesson: there is no excuse to let, over decades, our health system run down to the levels it is now. Hospital workers are already heroes. In the future, we must use our votes to get the system they want to work in.

Dr Milne’s book ***Stacking the Coffins: Influenza, War and Revolution in Ireland, 1918-19*** is published by Manchester University Press. It is currently on sale on manchesteruniversitypress.co.uk for £12.50.