Carlow man back home after lockdown in the Philippines 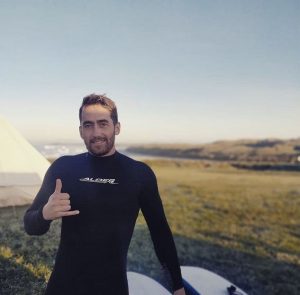 A CARLOW man came close to being stranded in the Philippines amid the Covid-19 pandemic.

Cian O’Brien from Browneshill described the scenes as he sought to get a flight out of the country as akin to a “zombie apocalypse”.

Now safe and self-isolating in Carlow, the 28-year-old is raising funds for Filipinos without the means to support themselves due to the crisis.

The health and fitness consultant had been based on the picturesque island of Siargao in the Philippines for much of the last 12 months while travelling in Asia. The dream island is covered in coconut palm trees and white beaches. “The sea there is this impossible-to-imagine shade of blue,” said Cian.

Days were filled with surfing and fitness coaching, but things came to shuddering halt with Covid-19 last month. Controversial president Rodrigo Duterte first locked down the capital Manila, with no domestic travel in and out. This was soon rolled out to the islands, including Siargao.

Tourists who arrived after early March were tracked and monitored for symptoms on a daily basis. They weren’t allowed to leave if they were there for 14 days and had to receive a quarantine pass for limited movement. Cian’s temperature was checked at airports in Manila and Siargao with a thermal scanner and a temperature gun.

A curfew was imposed from 9pm to 5am, with those breaking it thrown in jail. All non-essential businesses were forced to close, while an alcohol ban also came into effect.

Cian was limited to movement, even within the small town of General Luna, where he resided. You needed a travel pass to move any further within the village and another pass to go outside.

The lockdown, however, proved effective in the Philippines. This was partly due to a real fear of the police among many of the population. President Duterte had ordered a shoot-to-kill policy on those who violated quarantine.

Cian and others were given two days’ notice that the airports were due to shut. There were five emergency flights off the island and Cian was told by our Department of Foreign Affairs to do everything he could to get on a flight. He recounted waiting outside Siargao Airport with hundreds of other desperate foreigners. There was no social distancing here. People were called one by one to enter the airport and you had to be on a list to gain entry. Following a flight to Manila, there was a bus to the city’s main airport to catch a flight to Dubai.

Outside Manila Airport, Cian had to step over people lying on the ground, who had been waiting for days for a flight.

“It was like a zombie apocalypse,” he said. “I got my temperature taken inside the airport and because I had my flight within 24 hours I was allowed in.” 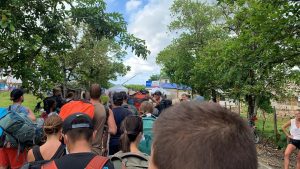 Things got increasingly nervy when his flight was cancelled, but following a 24-hour delay he was on his way home. He stopped in Dubai, where there was widespread panic in the airport, with rows breaking out between travellers and airline staff.

“I think it was just overwhelming for everyone,” he said. “There were people sprawled out on the floor everywhere asleep. I fell asleep as well, out of complete exhaustion.”

There were screens of cancelled flights, but Cian’s plane to London was still on. The final trek of a three-day ordeal was in the back of a van from Dublin Airport to Carlow.

He had to go into self-isolation straight away for two weeks. “I was in contact with more than a thousand people, definitely, over the previous 72 hours.”

Cian was struck by the lack of precautions at Dublin Airport. There were no temperature checks, just someone advising him to restrict movements for 14 days.

Cian wished to thank Aislinn, Ana and Pat at the embassy in Singapore and the consulate in Manila for their help in rearranging his flights and putting pressure on Emirates to continue flying, along with the Philippine Department of Tourism for organising the emergency sweeper flights and looking after the stranded tourists.

Now back in Carlow, the fitness expert is getting through self-isolation with some kettle bells and an exercise bike at home in Hanover. Son of Carlow football manager Turlough and choir director Mary Amond O’Brien, he hopes to return to the family home this Wednesday. He is particularly looking forward to the mini-gym at the family home.

Cian has also set up a Facebook group ’Covid-19 KFS Free Coaching’ to help people take control of their health and fitness in these strange and difficult times.

Cian’s thoughts aren’t far from Siargao. The island depends on tourism and families have lost their income. Reports are already coming in of locals going hungry. Cian’s island friends set up the Siargao Community Kitchen. Cian had been volunteering with the local health department, assisting their checks on tourists. He had intended to volunteer to prepare and deliver meals before it became apparent that he’d have to leave. However, he is fundraising for the good cause.

It costs around €9 to feed a family for a week over there. Staples are rice, dried fish and tinned meats. The food kitchen has already delivered over 2,200 meals. Cian is close to raising a target 100,000 pesos (around €2,000). People can donate at www.paypal.me/SiargaoCovid. 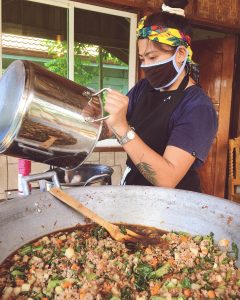