By Padraig Amond
LAST week we saw the official appointment of Stephen Kenny as manager of the Ireland senior soccer team with Mick McCarthy standing aside. The postponement of Euro 2020 threatened to leave the FAI with a bit of a headache as McCarthy was set to step down and be replaced by Kenny after the tournament. But because of the coronavirus, the tournament is now being played next year instead. 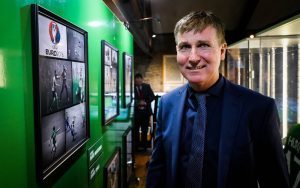 That dilemma of who was going to be manager for the play-offs against Slovakia was solved though as Mick McCarthy stepped aside to allow Kenny take over.
Whether Mick really stepped down or not though is another story, but I’m sure he is going to be handsomely compensated too and it also allows him to possibly look for another job in club football again.
The big question is, was it the right decision by the FAI to go through with the succession plan? On one hand it probably is time for Stephen Kenny to come in and get his tenure under way.
But at the same time, if I was Mick McCarthy I’d be really disappointed that I wasn’t getting the chance to finish off the job I started. But Mick is in football long enough and he knows how the business works. To be fair, these are unprecedented times so you can see why the FAI has done what they have done.
When it was announced that Stephen Kenny would take over from Mick McCarthy, I wrote that it was going to be a great appointment in the long term. He has had a very successful career in Ireland and has been preparing for this job since he took over his first managerial role at Tallaght Town in the Leinster Senior League at the age of just 26.
The job he has done with the Ireland U21 side in the last two years has been very good too and he has them playing a very attractive brand of football. It was just the same when he managed Dundalk so you can see why Irish supporters will support him. However, this will be a whole different ball game for him. He has never had to cope with this kind of public pressure as he is going to be under the microscope for every decision he makes.
Since he took the job last week, he has done a couple of interviews and he has been very impressive. He has most of his backroom team in place now too and he should have his old Dundalk coach Ruaidhri Higgins confirmed this week to join former internationals Keith Andrews (who was working with Kenny with the U21s) and Damien Duff. He has made a big call not to involve Robbie Keane in his staff even though Keane still has two years left on his contract with the FAI.
Keane was surprisingly given a four-year contract (on big money too) at a time when McCarthy only signed a two-year contract which was one of the final acts of John Delaney’s tenure. It created another mess for the FAI to have to clean up. This is the biggest job Kenny has ever had and he needs the right staff around him. I think he has got the balance right for himself so I hope he can be successful.
I would have played against a lot of Stephen Kenny’s sides when I was in the League of Ireland and they were always very hard to beat. You would speak to players or hear others speak about Kenny and what made him so good and if those stories are true, we have a good one on board.
I have never been coached by him, but I have spoken to him on numerous occasions. The last time was after a game I played earlier this season when he came to watch one of our players play. After the game I was on the team bus and he asked for me to come out and have a chat with him. I was really impressed by everything he had to say. He spoke about the immediate plans, asked my thoughts on a player or two and then spoke about the future and myself which was really good.
He is going in at the deep end now with his first challenge possibly a play-off game. Nobody can be assured of their place in the squad, let alone the team. Everyone will have a blank slate in front of them and I don’t think he will be afraid to rip up all that has gone before and try to implement his own style of football straight away.
The players he has worked with at the U21s will be so excited about his appointment because they have been excellent, so I expect a lot of those lads to be promoted to the senior squad in due course.
Who knows what is going to happen and if it will be a success or not, but I know the planning will be precise and he will do things his own way. I am very confident he will be a brilliant appointment for us and I just hope not too much is made of the play-off games, whether they are good or bad, and he gets the time he deserves to hopefully be a success for us. The future looks very bright.