O’Flaherty making the most of unexpected trip home

By John Foley
THE worldwide Covid-19 crisis has affected sportspeople in many ways all around the world and one local athlete who saw her season suddenly cut short is Síobhra O’Flaherty.
The Carlow town girl is a sports scholarship student at George Mason University, just outside of Washington DC, where she is studying kinesiology. 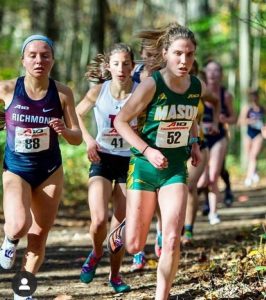 Síobhra O’Flaherty representing her college on the cross-country circuit

However, her college year and her athletic season grind to a halt at the end of March, allowing her to make an unexpected return to home soil for the time being.
“We went to practice on the Tuesday before St Patrick’s Day and we trained as normal. Then we were told on the Wednesday that the university was shutting until the beginning of April. On Thursday we went to practice as normal but we were told that they had just cancelled all spring sports.”
By that weekend they had told all students to leave the campus, but international students were allowed to stay. Síobhra was torn about what to do.
“Suddenly you’re in an apartment with no-one around and no training. I was still humming and hawing because we were still officially due back on April 3rd at that stage. So if I had come home, with the travel ban, I would not have been able to go back.
“But on the Monday they confirmed that the rest of the semester was gone so I got a flight back home on the Tuesday. I was lucky enough.”
The speed with which everything changed took her by surprise.
“A week before that, I could never have imagined being back in Carlow, but suddenly there was a cascade of events,” she says.
Síobhra has been enjoying her time in the US. Since making the Irish U23 team for the European Cross-Country Championships in December of 2018, she continued to make progress and ran a 10k personal best time last April.
Academically, Síobhra has also excelled and in February she received the prestigious Peter N Stearns Provost Scholars Award which recognises student athletes who have achieved a grade point average of 3.75 or better. Síobhra has scored a top 4.0 GPA every term since she started at George Mason University in 2018. 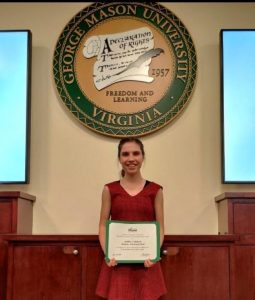 “I try to control what I can,” Síobhra says. “In athletics you can put in a lot and not get what you want out of it.
But academically, I focus on what I can control and it has been going well, for sure.”
Meanwhile, she’s studying for her upcoming exams which she will be able to sit online in May and she’s also managing to get out on the roads for some training ahead of what she hopes will be a return to the US athletic season in August.
“I live in Oak Park so I have quieter roads to go around,” she says. “Endurance athletes are in a better situation than jumpers or throwers or sprinters who require a track to do proper training. But for me it’s been fine running within the two-kilometre radius. In some countries people are locked down inside their houses, so we’re fortunate in some ways that we can still get out for a walk or a run.”