Carlow-Kilkenny ready to build for the future 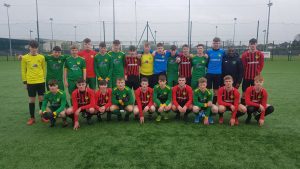 By Harry Shorthose
CARLOW-Kilkenny FC was getting ready to kick off their third season before the Covid-19 outbreak intervened. But the young club has had a far from smooth journey to where they are today.
The club came to life back in 2018 and they have had their doubters along the way. The idea came from a meeting between FAI regional development officer for Carlow, Garry Coady, and Carlow and District Juvenile League chairman Peter Harvey soon after the FAI announced the start of a national U15 league.
“We figured out pretty quickly that we wouldn’t get in with just a Carlow team, that we wouldn’t be strong enough,” says Harvey. “We didn’t think we would get accepted as just a Carlow team so we started looking at other options. We started looking at the geography of where we were situated and where other national league teams were situated in comparison to us and we found that both Carlow and Kilkenny were badly serviced because there was no team in either county. Either side of us was an hour’s commute either to Dublin or down to Wexford and Waterford. That’s a lot of travel when you’re going three times a week for training and matches.”
It was agreed they would sit down with the respective juvenile leagues and discuss the proposition of creating a national league team.
As coincidence would have it, three days later Harvey received a phone call from Kilkenny regional development officer Darren Murray who had the same idea.
“I told him that myself and Garry had already had this discussion and were already planning. So he went and talked to the Kilkenny league and then a meeting was held between the two leagues. Both agreed that it would be a great step. Players could still play Kennedy Cup with their league and then go and play national league with Carlow-Kilkenny.”
From there, the club faced an uphill task to get their licence and they only received confirmation three weeks before the start of the season that they were accepted. “We then had to get agreement from the FAI so we drafted a proposal with all the relevant facts, explaining the geography and the opportunities for our players to advance themselves. We had our pitch in Kilkenny sorted and we were using IT Carlow too.”
The process took time.
“We went out recruiting players and coaches on the understanding that we would be accepted. Getting them to sign up, not knowing 100% they were definitely in the league, was extremely tough. They were a bit hesitant at first because they didn’t know what they were getting themselves into. We were lucky that we had good contacts for coaches through Garry and Darren and our own academies and in the first year we got Mark Ross as well as Ethan O’Neill who had experience in our academies.”
They enjoyed a strong start to that first season and midway through, they started thinking about expanding to include an U17 squad.
“Our U15 squad were all U15 players because we have a rule that we can’t have any U14 players until after the Kennedy Cup. That meant that after one season, we had no outlet for these players to go to, so they would be coming in for one season and then leaving us again to go elsewhere which defeats the whole purpose of the club. It would also hinder us when trying to recruit players with rival clubs able to offer them a long-term place. That was part of our pitch to the FAI, we wanted to grow the club.”
With their foot now in the door, it was easier to get their licence for the U17 boys team.
“The FAI could see we were a serious football team and they never had any issues with us because we do things properly. There was no fear in the club that it wouldn’t work, there was a feeling that it was a necessity rather than a luxury. It was easy to get the coaches, Mark stepped up from the 15s and when Ethan left for America, he recommended James Toner. We sat down and liked what he brought to the table.”
With the success of both Gaynor Cup sides in recent years, a girls team always seemed a natural next step.
“Both counties were very strong and it was something we wanted to look at. We decided this year was the year because there is no Gaynor Cup after U15 level so we were going to lose those players because there was nothing for them at an elite level. It wasn’t the easiest thing to get though because Kilkenny United were also going for the licence, as they had a women’s team already. We felt though because we already had the girls from Gaynor Cup that they were already in our structures and we knew them, so we were the better option for them.”
The club approached the women’s FAI and stated their case. Their application was successful and a girls team was assembled for this season under coach Gemma Murphy.
Step by step the Carlow-Kilkenny club is building for the present and for the future. While public health restrictions have blocked their path this year, they will be a force once the national leagues are allowed to begin.
With a men’s U19 team and a ladies team both possible in the future, the club is determined to build on solid foundations.