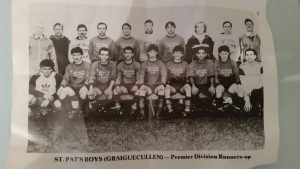 By Kieran Murphy
YOU can still hear the pain in Dinny Ryan’s voice. It was one that got away. The Graiguecullen-based St Patrick’s Boys came within a whisker of winning the Carlow-Kilkenny league in 1987-88 losing in a play-off against Evergreen in Derdimus Park, Kilkenny.
It was a tight finish to the league with Dinny, the St Pat’s keeper, recalling both sides had it in their own hands in the closing stages of their respective campaigns.
For their part, St Pat’s drew two of their last three games. One of those game was against Durrow who arrived to the St Pat’s pitch with only nine players because of a car breakdown. The home side didn’t capitalise with the sides sharing the spoils.
“We couldn’t put them away,” said Ryan.
On the other hand Evergreen would have won the title outright if they had won their last game instead of drawing it. It was that kind of season.
In fact, St Pat’s beat Evergreen in both of their league games, winning 10-3 in the second clash.
“You couldn’t write it. Everyone was on fire that day. An unbelievable result,” recalled Ryan.
But Evergreen won the play-off 2-1. Dinny cannot remember who scored the St Pat’s goal but he does remember his side had a second goal disallowed for offside. It was a harsh call. A St Pat’s screamer found the roof of the Evergreen net but a player had drifted into an offside position which was flagged by the linesman.
“Definitely the goal would be allowed nowadays,” conceded Ryan.
While the disappointment lingered, the keeper acknowledged the group were close knit. Apart from Jimmy Bolger, who passed away in 2013, the whole squad still lives and works locally. Many of them are still close with over half the squad playing golf now.
There was talk of a reunion between the two teams and while it would be easy for St Pat’s to get together Ryan says that many of the Evergreen players are now living abroad.
Interestingly, Pat Walker trained the team occasionally. He played soccer in England and was capped for the Irish under-21s on two occasions before having success as a coach in Sweden and Norway,
When Walker wasn’t around, Ben Dowling acted as player-coach.
Back row
Jimmy Bolger: In a time before the manager became as powerful as they are nowadays, Jimmy was much loved and highly respected. His soccer days went back to Greenburrin in Kelvin Grove and with his knowledge and organisational abilities the players only had to play soccer and worry about little else.
Eamonn Culleton: He was big and strong. Eamonn was best in his centre-half role where he let little past him and was exceptionally effective in the air.
PJ O’Neill: He moved quickly over the ground and was most effective up front where he was a prolific goalscorer.
Terry Dillon: He was physically very strong where he was most effective at midfield and was a great distributor of the ball.
Mark Harland: He was best suited in his role as a right full-back where little got past him.
Dinny Ryan: The goalkeeping position was ideal for him as he was big and aggressive while his timely shouts of encouragement kept those in front of them on their toes.
Ronnie Ryan: He was very good when in possession and was an astute passer of the ball. He played his best football at midfield.
David Cuddihy: He may have come across as easy going, but he was a great all-round utility player and was best-suited in defence or midfield.
Noel Salter: Of all the players around that time the winger would have been one of those best equipped to play League of Ireland football. He possessed a lovely touch and had peripheral vision which served the team well.
Seamus Bolger: He was from Graiguecullen and as a physio with the club he knew the players well and reacted well to their requirements.
Front row
Paul Hennessy: The former full-back was able to adapt well when required and often played in a central role with the club either at centre-back or at midfield.
Pat Bolger: He could play either at left or right back but no matter where he was positioned he was as tough as nails and forwards found him to be a strong and difficult opponent.
Ben Dowling: Ben had a long career in soccer where he featured on earlier Barrow Rangers teams and rarely had a bad game no matter who he played with.
Paddy Doogue: It is important to have a player who can fit in anywhere and in Paddy, St Pat’s had one player who could settle down in midfield or forage up front with effect.
Philly Kehoe: Here was another player who could do a job no matter where he was positioned. He was particularly effective in midfield.
Willie Quinlan: This man needs no introduction in Carlow GAA circles, but with St Pat’s he had a great engine and in a time where players generally stayed in their designated positions Willie patrolled up and down the field with deadly effect.
Aldo Marini: He played up front, possessed great ball control with those around him feeding off his talent and ability.
Damien O’Brien: He was a strong utility player who could operate brilliantly in almost every position he was selected in.
Stephen Harland: If the team needed an injection of speed up front when they were finding defences hard to break down, Stephen was often called in to do such a job using his speed down the wings.
Not in photo: Pat Timmons missed the play-off having picked up a number of bookings during the season. His loss was huge as he was most influential in the middle of the defence.