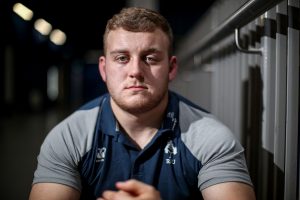 Sport: Rugby
Club: Clontarf and Ireland U20s
Earliest sporting memory: That is a hard one. I suppose it’s going out training with the minis on a Sunday morning. I probably would have been part of the first big group of minis. There still wouldn’t have been a lot of us but it was something that stayed with me.
Memorable sporting moments: Getting my first cap against England in the 2019 Junior World Cup. A first cap is significant and particularly against England. Winning the way we did (42-26) was special as well.
Biggest influence on career: My parents, Lena and Paul. They were the ones who brought me training. They did everything for me and brought me everywhere. They helped me as much as they could and gave up their time to help me get as far as I could in rugby.
Sporting hero: I always wanted to be a winger or a centre. I remember running around the back garden thinking I was Brian O’Driscoll. At that time I was going to be a centre or winger, but it was never going to happen. By the time I was eight I was heading for the front row so it was John Hayes I looked up to after that. 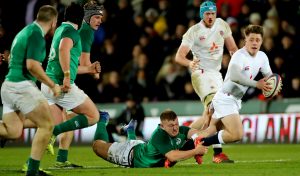 Most difficult opponent: It wasn’t really one player. I think the Scotland front-row this year, in the under-20 Six Nations. More from a personal point of view, it didn’t go as well as I wanted to that day. They were very good in the scrum and I found it very difficult that day.
If I could turn back the clock: That Scotland game. It wasn’t my best game and I wish I had done a few things differently.
Your favourite holiday: Sunny Beach, Bulgaria. Sixth year with all the lads. It was interesting. I’ll leave it at that.
Memories outside sport: I wouldn’t have a lot. Most of what I have done has been through sport. Most of my friends came mainly from sport and I have always been directed and migrated towards sport.
Favourite bar/restaurant: The Derreen Bar in Tullow. They have a good pint of Heineken and do a good kebab bowl.
Three people you would bring to dinner (not family): Muhammad Ali would have to be one. Watching videos of him he was really entertaining and he was such a good boxer. Usain Bolt would be pure entertainment too, and Brian O’Driscoll who I consider to be the best rugby player ever to have played for Ireland.
What would be heaven for you: Being able to eat any food I want to and not having to face the consequences of eating too much of it.