By Harry Shorthose
GRAIGUECULLEN native Kylie Murphy is the captain of the most successful women’s soccer team in the country, Wexford Youths. It’s safe to say that she lived and breathed soccer from a young age. As part of a soccer-mad family – her brothers Lee and Pádraig play for New Oak Boys and her wife, Essmay, plays for Hanover Harps women – that’s probably no surprise. 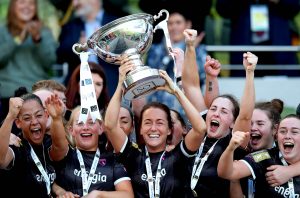 She even postponed her honeymoon by nine months to play in the Women’s Champions League with Wexford last summer, such was her dedication to the club and the sport. So the current lockdown and postponement of sport was always going to be tough for her. But Kylie refuses to be bogged down by it all.
“I’m not going to complain at all because it’s the same for a lot of people and worse for so many more,” she says. “I don’t want to sit here and say I’m in the worst spot because I’m not. However, in terms of missing soccer and missing the girls, it’s very surreal, you just don’t ever think that something like that could be taken away so quick.
“In the back of my mind, I’m just trying to stay positive, telling myself we’ll be back in a few weeks and I don’t want to be falling behind. It’s the only way I can keep myself motivated.” 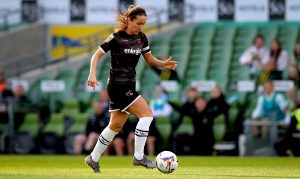 She says uncertainty surrounding the future is difficult to deal with.
“It’s not knowing that’s the toughest part, if we had a date when we’d be back, it’d be something to work towards. It’s a whole different ball game trying to train on your own and do all your fitness work.
“It’s a lot harder to motivate yourself knowing in the back of your head that you mightn’t kick a ball this year. It’s so much easier with your team-mates around you because they’re pushing you on.”
It has been a rollercoaster couple of months for Kylie who returned from her honeymoon on the Monday of the week Wexford were due to kick off the new season against DLR Waves.
“We got home on the Monday, I had one session with the girls on the Tuesday and then training was cancelled that Thursday and that was it. They shut up shop and we weren’t allowed to train.”
Murphy is trying hard to keep busy.
“I try get up early and I’m re-doing the whole house, painting, gardening, trying to get a few bits done. I try to get out for a walk or a cycle, try to keep myself to some sort of routine, as I would normally. It’s weird though because I’m never usually at home. I’m at work all day, I’m gone every evening for the soccer. If I’m not training, I’m in the gym. I’m gone all weekend, so it’s very surreal, it’s very hard to be at home because I’m constantly used to being on the go.”
It is a challenge to keep her fitness regime going too.
“It’s hard because I’m used to training up in Killeshin FC and obviously they closed the pitch so I found it difficult getting onto grass. I got a loan of a treadmill from a friend so that’s keeping me sane. We have to do one big run a week but the rest I can do on the treadmill. Luckily enough, my local gym let me borrow a few weights so that’s keeping my strength up, I do what I can.
“I have to watch my diet a lot more too now that I’m at home all day. I don’t have space in my garden, it’s not huge so I’m just kicking a ball off the wall and hitting it back and try keep my touch as best I can.”
As captain of Wexford Youths, she has led her team to many memorable days, most recently victory in the Women’s FAI Cup final at the Aviva Stadium last November. She is determined to fight for more accolades in the future.
“I’m absolutely raring to go, I will never take football for granted again,” she says. “I won’t be telling myself I want a night off again. It’s in the back of my mind constantly though that I mightn’t get to kick a ball at all this year.
“I’m not worried, but I’m just conscious of the fact I’ll be a year older next year. It’s gone completely out of my head now [the idea of retirement]. I’ll keep playing until I’m 40 now if my legs will let me. It’s a bit of a reality check, I don’t think I realised how much I loved it until I was told I couldn’t do it anymore. I’ll keep going and keep myself as fresh as I can for as long as I can.”