Turlough believes games may not return until 2021

CARLOW senior football manager Turlough O’Brien believes it is very possible there will be no Gaelic games of any kind played for the remainder of 2020.

Wednesday’s announcement by the GAA that there will be no intercounty action until October at the earliest has provided some degree of clarity to squads around the country. But each development also brings a raft of new questions.

How do sports of all kinds react to the ongoing changes to social distancing guidelines? At what stage can sportspeople confidently participate safe in the knowledge they are not adding to the risk of infecting themselves or others with Covid-19? 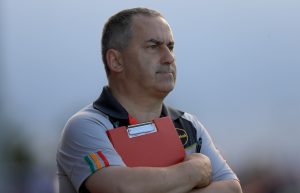 Will there be an opportunity for club games to restart this year? O’Brien has his doubts.

“I don’t think there will be any football or hurling this year at all,” he told The Nationalist.

“I think there has to be priorities. Players might be healthy. But if they pick up something and bring it home to their families, that’s the danger. There’s no way to protect against that and I don’t think the GAA will be prepared to take that risk.”

He is quick to point out that sports administrators have an unenviable job at the moment.

“To be fair to them, they are in a difficult situation, it’s unprecedented. They’re trying to keep their options open. But the window is closing I think. From the players’ perspective they need clarity. This has been going on quite a while now and they’re training in a vacuum. It’s very hard to keep doing that. So we just told them [the Carlow senior football squad] to stand down for the moment and we’ll wait and see what happens.”
O’Brien says the GAA’s standing as a focal point for communities throughout the country means they need to make considered decisions.

“The GAA is unique in that it’s such a community-led organisation and it has to show real leadership,” he says.

With the intercounty scene out of the picture for the moment, there is a school of thought that the club game can make a quicker return. But there are plenty of potential pitfalls there too.

“The club game might be easier to operate,” O’Brien accepts. “You wouldn’t have people travelling long distances on buses, for instance. You wouldn’t have big crowds at matches so you could have social distancing for spectators at least. You’re talking about players coming directly to the field, going home to get showered. But that doesn’t tackle the issue of physical contact.”

How often are coaches heard urging their players to be “touch tight” on their opposite number? It goes against everything we have been taught for the past two months.

“There are risks,” says O’Brien. “Let’s say you go ahead with a championship, your team is preparing for it and on the Tuesday before, four lads test positive. Or, they pass the test and they pick it up the next day. There are too many imponderables. Health and safety has to take priority. There’s a real danger with all this talk or relaxation of restrictions that this thing could spike again.

“With all the great work that has been done, we have to grin and bear it. It’s not nice but it’s the reality of the world we’re in at the moment. For everybody’s mental well-being we’d be better off taking it off the table altogether and maybe we can face it in a more positive frame of mind in the future.”

And so those elite intercounty players, who had been following training programmes given to them by their coaches in recent weeks, are officially off the leash.

“It’s only May now and there’s nothing until October at least so they’re training in a vacuum anyway,” says O’Brien. “Lads are better off taking the time out. They’ll still probably train themselves because it’s what they do. But at least they can do it in their own time, at their own pace, their own programme.”

The interminable wait to see a Carlow jersey in action looks set to continue for a long time to come.