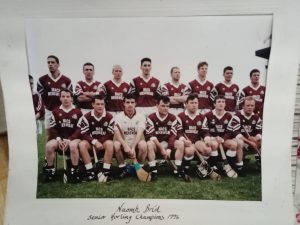 By Kieran Murphy
IN 1996 Naomh Bríd shocked St Mullins when beating them by 1-16 to 2-6 in the Carlow senior hurling final.
The new champions had formed in February of that year when St Fintan’s (Ballinabranna) and Parnells (Old Leighlin and Leighlinbridge) came together.
Stephen Bambrick, who played in goal that year, recalled where the name and the purple colours of the jersey came from.
“The graveyard in Tomard was called St Brigid’s and we opted for a colour not being used by any other club,” he says.
The initial training sessions took place under lights in Milford but they also trained in Ballinabranna.
Mick Doyle has Wexford connections so it was a coup to sign Christy Keogh, the former Wexford player and manager, as manager.
After a practice game against Marshalstown, their first competitive game was against losing 1995 finalists Carlow Town in the Bolger Cup where they went down by four points.
After beating Carlow Town in the championship semi-final, there was a gap of at least three weeks to the final. In Ballinabranna, Christy Keogh had a structure to training.
“There is a hill on the side of the pitch and Christy always insisted the training sessions didn’t last for more than an hour. Players had to arrive on time.
“Every night we did sprints up the hill. It was tough going up, but going back down our legs were like jelly which was a bigger problem,” recalls Stephen.
There was a sibling rivalry between the two teams in the final too as two brothers were the respective parish priests of the competing teams.
“Father Ned Aughney was in St Mullins and Father John Aughney was in the Old Leighlin parish,” says Stephen.
A 1-16 to 2-6 victory for Naomh Bríd wasn’t as close as it looked. Bambrick says he had a nightmare opening quarter.
“I let in an easy shot from John McDonald. St Mullins got a second goal in the second half. There was little in it but both sides were missing chances,” the net minder recalls.
Naomh Bríd’s hunger and fitness saw them over the winning line with their full-forward scoring Naomh Bríd’s crucial goal.
“We might have been a point up with time ebbing away when John Townsend scored a goal for us. We added a few more points as our fitness told in the end.
“Over half the starting team had played underage finals with Parnells and St Fintan’s. Each line on the team had one or two with county experience at football and/or hurling which in a game of tight margins was invaluable,” recalls Bambrick.
The cup was paraded through the three villages – Ballinabranna, Old Leighlin and Leighlinbridge. There were links with Christy Kelly’s pub on the quays in Carlow. While there was a strong connection between the pub and Carlow Town Hurling Club, it was appropriate to call in there too.
They were back in Ballinabranna for training on the following Wednesday. In the Leinster club senior hurling championship they beat Glenealy of Wicklow by 0-9 to 1-1 in a tough first round game where Naomh Bríd players were injured and unable to play against O’Toole’s of Dublin who beat them in Dr Cullen Park two weeks later.
That ended a glorious year for the club who went on to win further senior titles in 2004 and 2008.
Of the 1996 squad, Niall Bambrick, Stephen Bambrick, Johnny Nevin, Johnny Kavanagh, John Carey and Michael Lowry were on the 2004 panel while Nevin, Kavanagh, Keelan Delaney and Danny Quirke featured four years later. In fact, the club has never lost a senior final.
Naomh Bríd: Stephen Bambrick; Phil Meaney, Niall Bambrick, Eoin Anthony Keating; Jason Hughes, Johnny Nevin, Denis O’Brien; Brian Lawlor, Jimmy Fitzpatrick; Danny Quirke, John Townsend, Johnny Kavanagh; Andrew Dowling, Keelan Delaney, Robert Sheehan. Subs: John Carey, Brian Maher, Jimmy Brennan, Bernie Brennan, Mick Miley, Peter Brennan, Ned Kane, John Thompson, Ger Bermingham, Hugh Fitzgerald, Seamus McLean, Mick Roche, Mick Lowry, Carl McDonald, David Rice.
St Mullins: Richie Kielthy; Eugene McDonald, Jim Kavanagh, Tom Doyle; Richard Dreelan, Seamus O’Brien, Anthony Ralph; Declan Kavanagh, Pat Coady; John McDonald, John Cahill, Micheál Ryan; David Doyle, John Kavanagh, Charlie Byrne. Subs: Pat Murphy, Pierce Murphy, Christopher Walsh, Sean Gahan, Michael Walsh, Pat Grennan, William Foley, Mike Lawlor, Martin Murphy, Donal Doyle.
Referee: Pat Ahern (Carlow
Town HC)

FRONT ROW
Danny Quirke: From corner forward he scored 0-3 in the 1996 final. He played from the heart and always gave his all.
Johnny Kavanagh: He was the leading scorer for the side during the year and hit 0-6 against St Mullins in the final. He played for Leighlinbridge junior footballers last year.
Stephen Bambrick: After a shaky start in the final he went on to enjoy a solid game. He was one of six players playing senior that year who also featured with the winning Old Leighlin senior football championship-winning side the following year.
Johnny Nevin: Every neutral in the country wanted to see Johnny win a senior hurling medal. He put in a huge performance and picked off a point at a crucial stage. For club and county he was consistently outstanding.
Robert Sheehan: He was a very skilful corner forward and emulated his father who won a senior title with St Fintan’s. He is an international karate referee now.
Jimmy Fitzpatrick: The engine of the team at midfield. He is still going strong and has won three junior titles with Palatine.
Andy Dowling: He was a classy corner forward who was hard to mark. He scored 0-3 in the decider but subsequently sustained a serious eye injury which necessitated his retirement.

BACK ROW
Denis O’Brien: At 19 he was the youngest but his strong and direct approach in the half-back line was key to victory.
Brian Lawler: He played midfield for both club and county. His robust style yielded a point after the goal which ensured the eventual winners maintained their momentum. He is chairman of Naomh Bríd camogie club.
Jason Hughes: From wing-back he often picked off scores. Despite this, he was still a tacky defender who gave nothing away easily.
John Townsend: He was an old-style full-forward who was committed and ultra-dangerous around the small square. He scored the vital goal in the final.
Phil Meaney: He was very much a leader which showed when he captained Parnells to minor success in the 1980s and led them to under-21 success in 1991. He is chairman of Leighlinbridge GFC now.
Niall Bambrick: His positioning on the edge of the small square was a key move by the selectors earlier in the season. His intercounty experience was vital and particularly on county final day when he put in a huge performance.
Keelan Delaney: A canny forward with a direct approach and a lightning quick swing. If defenders didn’t get close to him, the ball was gone.
Eoin Anthony Keating: Known as junior, a corner back whose tight-marking style ensured forwards were going to get nothing easy.
SUBS
John Carey: He was introduced at midfield where he kept a plentiful supply of ball going into the forward line.
Peter Brennan: He scored some vital goals in the earlier rounds and on his introduction in the final his energy refreshed matters around the field in the last quarter. He is chairman of Ballinabranna GFC now.

Carlow’s links to the Niemba ambush