Behind closed doors would be ‘a waste of time’: Bonnar

By Kieran Murphy
CARLOW senior hurling manager Colm Bonnar is not optimistic the GAA will be able to return to anything approaching a normal season in 2020. Last week, the GAA issued a statement advising clubs and counties to adhere to government restrictions and to refrain from organising on-field activity until at least 20 July with predictions intercounty activity will not start until at least October. 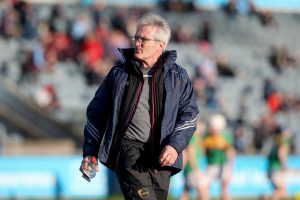 While Bonnar envisages some games could be played behind closed doors, he says this would go against the entire ethos of the GAA.
“That would be a waste of time. The GAA supporter is the bread and butter. It is the parish and the people coming together. I cannot see any game being played [behind closed doors].”
Bonnar does admit if the GAA could financially benefit from such games, then there might be an argument for major games going ahead.
“Obviously the bigger games have bigger television audiences but not the Joe McDonagh or the Christy Ring. That is for sure. The Munster and Leinster [hurling championship] round-robin have a bigger audience and they would pick up bigger revenue from television.” he reasoned.
“Then you are really looking after the elite.”
Bonnar stressed any decision made should be taken with the safety of players and the community in mind.
“There is so much uncertainty. If a player picks up Covid and one of his parents were to die as a result of it, the consequences are crazy,” he said.
There are also issues surrounding player insurance which has been frozen. This means players are not covered if they pick up an injury when they are operating on their own.
The Carlow senior hurlers have been advised by Bonnar to use their time sensibly and keep themselves in condition until they know what is going to happen. Only then can the Carlow management team plan for the future, if there is one in 2020.
“That was made very clear, that no-body is insured to do anything,” insisted Bonnar. “No player would be silly enough to work outside those rules. The next minute a player gets injured. He looks to the county board and nothing is there. The GAA will be very cautious about starting up the whole thing. It is only an amateur sport and there are so many uncertainties, I cannot see where it is going to go.”
Ultimately, it is a matter of waiting and hoping.
“I take with a grain of salt that we will be starting in October. First we have to look and see if we can get a club season going. Will we have the insurance cover? It is a question of watching this space,” the Carlow hurling manager says.