By John Foley
CARLOW Camogie chairperson Linda Kenny says she hopes club activity will take place later this year in the wake of the recent government roadmap for the easing of Covid-19 restrictions.
“Our hope would be to run our senior, junior and minor championships as we planned in the round-robin format. Whether that will happen, we don’t know. But we have said to clubs that if we get the go-ahead, and we can do it in a safe environment, we will provide camogie to all age groups. But obviously safety is paramount.”
She says there is likely to be a huge demand on facilities and personnel should games resume which will present challenges.
“The GAA will be using grounds, as will ladies football. We will have to think outside the box and look for the cooperation of different people. Whether it’s midweek games, the use of floodlights. And of course we’re all using the same referees aswell. We’re in unprecedented times. It’s all about resources and if we get back, it’s going to take almighty cooperation from everybody to get games played.”The intercounty scene is also to the fore of the minds of camogie administrators and plans are being put in place to return to action whenever restrictions are lifted. Currently only development squad activity has been officially suspended by the Camogie Association. 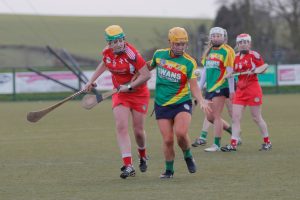 Linda Kanny says it was be preferable if this year’s national camogie league could be completed. Carlow enjoyed a good start to the competition including victory on the road over Louth Photo: Pat Ahern

The format that intercounty competitions might take is still very much up in the air. It’s understood the association has different plans in place for a return to action in August, September and October with an increasing chance that All-Ireland championships will be straight knockout the later games return.
“We would have liked to complete the league,” says Linda. “We were using trial rules which would have benefited the game into the future. We were also having a good run in the league so we hope that will be finished. In championship, I can only see a knockout at adult level.
“Travel would be another issue with the array of counties that are involved at All-Ireland intermediate level. We don’t know how we would get players to those venues as yet.”
In general, through contact with clubs and camogie association members in other counties, Linda says there has been a shift in expectations over the course of the past month.
“At the start everyone was saying, we can’t wait to get back playing,” she says. “But the longer it has gone on, people are realising containing the virus and keeping everyone safe is the most important thing.”