Courses ready for golf, but not as we know it

By Kieran Murphy
Golf courses may be set to re-open around the country on 18 May, but golfers are going to face a range of procedures in relation to how they book a place on a tee-box.
Then when they get to the club itself they are going to have to familiarise themselves with the guidelines set out by the Golfing Union of Ireland (GUI), the Irish Ladies Golf Union (ILGU) and the clubs themselves before they even get to hit a ball. 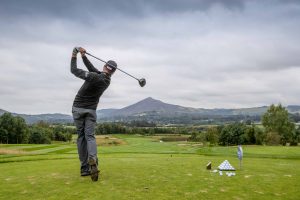 In the initial stage, play will be for members only and competitions will not be permitted

Carlow golf club captain John Brophy has warned this is not a return to golf as it was before the Covid-19 restrictions came into place.
Within their constitution the Carlow management committee has the power to introduce certain laws which run parallel with the information in the GUI/ILGU booklet, aptly named ‘In Line with the Protocol for the Introduction of Golf in the Republic of Ireland’.
The Carlow committee has gone a step further and produced their own booklet. This will be given to all Carlow members who wish to play golf from next week.
“We have a lot of our preparation done. The booklet to members will explain how they can book their golf, what they do when they turn up and what to do when they are playing,” said Carlow men’s captain John Brophy.
“We are going to introduce those new rules and bye-laws which are not voluntary. We are saying they must do so, but they are bye laws and temporary rules which can be withdrawn when restrictions ease.”
The club will have a marshal on the first tee at all times.
“We are introducing a bye-law which says we will have a social distancing marshal on the first tee-box. You must abide by what he or she tells you. If there is no marshal in place the course is deemed to be closed,” Brophy explained.
The Carlow captain confirmed there will be no competitions until 8 June while the course will not be open to visitors until 29 June at the earliest.
“We are very conscious we have to temper people’s expectations. This is not a return to full golf. It is a phased resumption of activity and we will have to get used to the new methods,” stressed Brophy.
Further south, Denis O’Neill, men’s captain of Borris Golf Club also confirmed they will be abiding by the guidelines set out in the GUI/ILGU booklet.
Because of the 5km restriction on travel, he believes many of the club’s members will not be able to return on 18 May.
“Over 50% of our members and maybe more are outside the 5km distance. Basically we will stick by the rules with no competitions and golf will only be for members. We are telling our members it will be golf, but not golf as we know it,” he confirmed.
Bunclody Golf and Fishing Club have confirmed they will be opening their course on 18 May. Manager Caroline Dunne is looking at this from different angles.
“We are open but adhering to all guidelines from the government. It is positive in that sport is starting back. Especially for mental health as much as anything else.
“It is good to get out but it is important people know what is involved and what the guidelines are. It is not a free for all. While it is a green light, it is a green light with lots of restrictions. We have to start somewhere.,” she confirmed.
“Just like in our day-to-day life, going into a shop and staying away from people, the same things apply for golf. You will not have groups in the pro-shop, the tee-boxes. Life in general has changed. It is life and this has to be carried through golf.”
In the past, members in clubs all over the country could have decided, at the click of their fingers, to go out and play a few holes. Until Covid-19 is beaten, this practice is a thing of the past.
In Mount Wolseley Golf and Hotel Resort, men’s captain Tom Condon says the decision when to open the course will be made by the general manager.

Meanwhile, the Golfing Union of Ireland has announced an extensive update to its schedule of championships for 2020.
The Flogas Irish Amateur Open Championship has been cancelled due to the uncertainty around international travel and related disease control challenges.
The ‘big-four’ provincial championships – the North, South, East and West of Ireland – have also been cancelled after detailed consideration of all options for rescheduling. The Interprovincial Championship and the Underage Interprovincials have also been cancelled.
A limited series of Bridgestone Order of Merit events have been rescheduled, with the Munster Stroke Play, Mullingar Scratch Trophy and Connacht Stroke Play all being rescheduled for August and September, following which the AIG Irish Amateur Close Championship will be the season-ender at Rosapenna on 9-11 October.
Caddies will be prohibited in all events, and the format and terms of competition may be altered.
Championship entrants will be contacted directly regarding the status of each championship they have entered, and in the event they have entered a championship that is now cancelled they will receive a refund.