Kelly taking it one step at a time

By Harry Shorthose
IN uncertain, difficult times like these, community spirit is more important than ever. People need to stick together and help each other out. That’s exactly what Carlow is doing as they rally behind New Oak Boys FC legend Sean Kelly who is leaving his own personal limits behind him to walk 120km during the month of May to raise money for MS Ireland. To date, his fundraiser has raised close to €2000 thanks to the generosity of the community.
“Everyone seems to be really positive about it, encouraging me and supporting me so the reaction has been very good,” Sean told The Nationalist. 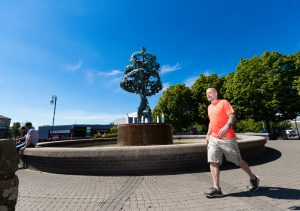 Sean Kelly walks past the Liberty Tree in Carlow on Saturday as part of his May 120km challenge in aid of Multiple Sclerosis Ireland
Photos: michaelorourkephotography.ie

“It’s been very positive I have to say. I think I’m tenth on the overall list of money raised which is good because there are 12,500 people doing it. That says a lot about the people around Carlow. Maybe they just want to laugh at me, I’m easy with that too,” he laughed.
“€500 was all I was looking for to start with, I’m at €1900 now. The support has been very good from people all round. A lot of people I just knew from football, just random people who I haven’t seen or heard of in years, I used to play against them or something and they’re sponsoring me so it’s good to see.
“It’s just such positive feedback everywhere. You get to know a lot of people over the years who wouldn’t necessarily know you’re ill, But they hear through Facebook and see what I’m doing and it’s really good to see how supportive everybody is.”
It’s a personal fundraiser for the former New Oak player and manager who has been living with Multiple Sclerosis since 2017.
“I was diagnosed with it three years ago and since then they [MS Ireland] have been sending me emails asking would I do it. I eventually gave in and said I would do this while I’m able.”
The illness meant he had to step away from day-to-day involvement with the Carlow town soccer club.
“I just wasn’t able physically and the killer is at this time, there is no football and I’d love to be getting out to watch the lads. I was always feeling so tired and lethargic and went to the doctor who sent me to hospital and I was diagnosed,” he said.
“Tiredness and dizziness are the main things at the moment and not being able to do what I want to and always have been able to do. Just getting out and kicking a ball around with my two boys, especially my young lad, that’s tough.
“It’s not easy at all. It’s frustrating! So much I’ve taken for granted during the years. Like you do in life, you take things for granted, you don’t think they’ll be taken away from you and when they are, it’s like, ‘what do I do now?’ Even this walking is difficult, the left leg dies a death after not too many steps so I try get out first thing in the morning and drag myself around in the evening. I’m just trying to keep going.” 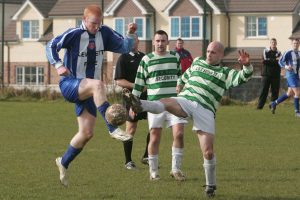 Sean is staying positive.
“It gives you a focus and something to aim for rather than just wallowing. There’s no football on the telly either so I have nothing else to do. I’ll definitely try to keep it going when I’m done. There’s so many podcasts I like listening to, it’ll be the perfect time to do it.”
His family are very supportive too.
“My wife Sharon is amazing to bear with me. I was never the easiest person to live with anyway, the whole family is really supportive. Sharon was out with me this morning, I’m not long back from a 2k walk with Jayden, Dean was out with me a few days ago. Even my friends are very supportive and encourage me and keep me going, some have even offered to come out walking with me.”
To support Sean, visit his Facebook page or see http://www.themay50k.com/fundraisers/seankelly