Local cricket clubs ready for action when the time comes

WITH the sun shining and the long evenings coming to the fore, the end of April usually signals the start of cricket season. By now, we should be three weeks in with the two clubs in the county, Bagenalstown and Carlow, starting to lay down a marker for the season ahead. However, like with all other sports, the Covid-19 outbreak has played havoc with that. Neither club has started pre-season training and the official word from Cricket Leinster is for a return on 20 July with a reduced season as per the roadmap released by the government recently. 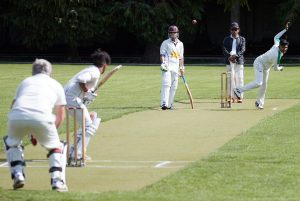 The domestic cricket season is expected to return on 20 July

“Practically, we could probably get going fairly quickly once restrictions have been lifted,” says Bagenalstown chairman Mat Baker. “We have been doing a bit of work on the grounds so they should be ready to go but we haven’t trained, we need to train realistically before we can start. We can only speculate as to a return, we can only go with the official word from Cricket Leinster and keep our fingers crossed. Player safety is the most important thing at the moment though. We’re hoping that we can be back soon, we’re hopefully going to start some pre-season training in small numbers according to the restrictions soon with precautions and social distancing in place.”
It’s a similar situation in Carlow.
“It’s a difficult time for us at the moment. We had started some indoor training with the kids but that stopped as soon as the lockdown came in,” Carlow committee member Jimmy Dooley explained.
“We’ve been busy behind the scenes though, we have had committee meetings via Zoom every two or three weeks. We’ve met with representatives from Cricket Leinster who have been helping us on a mentorship scheme. We’ve been busy putting some big plans in place for the season ahead. We can always use them for next season though. We are hoping to get some coaching going via Zoom or Microsoft Teams where a coach shows the kids some drills and helps them with their bowling or their batting. We can probably get going soon enough once the restrictions are lifted. Carlow College has been very supportive the last couple of years so hopefully with their help, we could get the grounds ready fairly quickly. We will follow the Cricket Leinster guidelines as to getting back to action.”