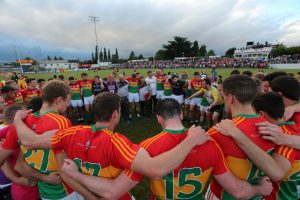 At the start of the year, you could never have imagined a summer without intercounty GAA championship action. Here are 10 things we’ll miss in the months ahead.

It doesn’t matter if you are an artist or a crayon dabbler, every county starts with a blank canvass.

Only a handful of counties (perhaps five) have a realistic chance of winning the All-Ireland football championship. In hurling, at least eight counties believe they can win the Liam MacCarthy Cup.

Of course there are hammerings, one-sided games, lop-sided provincial contests and an uneven playing field.

Yet nothing beats the morning of a match when your county is in action. It brings meaning to life as communities throughout the county come together — the walk out to Netwatch Cullen Park, the sun shining, tasty ice cream, the county colours flying high.

2 The smell of a championship win

Nothing beats a championship morning in Carlow, Portlaoise, Kilkenny or wherever.

An early start, Mass, breakfast, county colours, the buzz, the excitement and getting to the ground early.

Just imagine how Carlow supporters would have felt after turning over Offaly last weekend with a tasty clash against Kildare on the horizon.

A championship win for a county, no matter how rare or frequent it is, is still a wonderful experience. It represents an opportunity to put the chest out.

The car boot picnic was back in business as supporters dined out on the flask of tea and ham sandwiches before away games — supporters fuelling their bellies before the battle commenced. Family and friends, making new friends and recognising familiar faces.

3 Would Tier 2 have worked?

We won’t know in 2020 if Tier 2 of the All-Ireland senior football championship would have worked.

Before the Covid-19 lockdown kicked in, it’s hard not to believe that the likes of Carlow, Sligo, Leitrim, Longford or Offaly would not have gone for it, attempting to win an All-Ireland championship final in Croke Park.

Like it or loathe it, The Sunday Game has become a staple diet of the GAA championship summer. The Sunday night programme is a “must see” to hear the views and opinions of the so-called experts.

While we give out about it, we wouldn’t miss it for the world, although the hurling analysts give far more insight than their football counterparts.

The championship post mortems keeps us going, creating many a good row among the viewers. The pundits end up making lots of headlines for the following few days too.

5 Pressure on the Special Ks

Kilkenny haven’t won an All-Ireland senior hurling title since 2015. Kerry’s wait for the same football crown goes back to 2014.

Have teams copped on how to beat Brian Cody’s Cats? With Davy Fitzgerald getting under Cody’s skin, it will be a huge pity if we miss these two entering the ring for another spat.

Meanwhile, Kerry are feeling the intense pressure of being second best to Dublin. Watching the Sky Blues steal all the glory is churning in their gut. The Kingdom is waiting for the chance to finally end the pain, especially with doubts over how Dublin will fare under Dessie Farrell.

The window is closing and the opportunities are getting less frequent. But there is always the possibility of an underdog making waves.

Monaghan were moments away from reaching the All-Ireland senior football final in 2018. Roscommon have reached the last two Super 8s. Donegal have all the ingredients in the pot if they could manage one big scalp.

Wexford had Tipperary by the tail in last year’s All-Ireland hurling semi-final, while Laois beat Dublin in the Leinster round-robin.

The football championship in Connacht had the makings of a great one. Armagh, like a delicious orchard, were ripe to threaten Donegal, Tyrone and Monaghan. Would Kildare or Meath have climbed off their respective sick beds to challenge Dublin? The Limerick hurlers were sniffing blood, ready to chew iron and spit out rust in their pursuit to reclaim the Liam MacCarthy Cup.

The tactical planning by managers will be missed over the coming months.

Is there a better sight in the world than a no-holds-barred, high-octane clash of the ash hurling championship match with the sliothar travelling faster than a Ferrari, accompanied by savage hits all over the pitch?

The Leinster and Munster hurling championships possess the teams to produce these games. With new managers in place in lots of those counties this summer, they promised loads of best sellers that may not now be released until 2021.

8 Interaction of players with fans

The GAA is local and passionate. Supporters of the two teams sit, mingle and argue together during the games. Then, afterwards, if players win, lose or draw, they are mobbed on the field by young adoring fans.

The sight of players giving their time to every child will be sorely missed. It sums up what the GAA is all about.

Monday morning at 8.30 am, the football and hurling qualifiers draws were something everyone looked forward to. Who will we get? Will we be home or away? If you missed the draw, social media or a text message brought you up to speed.

Once the draw was made, plans were put in place for the next game. Don’t believe anyone who said they had no heed on the draw — everyone tuned in.

10 The skill level of amateur players

Watching the skill levels of the best players in the country is a joy to behold — the pace, the fitness, the intensity. The courage, passion and will to win are wonderful to see.

Sometimes we forget that these players are amateurs and have to get up for work on Monday morning, often battered and bruised after a tough encounter 24 hours early.

We take the players and their commitment for granted. It has never been more evident than during the current lockdown when no sport has left an empty vacuum.

When sport eventually returns, we will appreciate it more, particularly our footballers and hurlers. Instead of complaining, we should be grateful for their skill and passion when wearing their county colours.

We miss you lads and ladies, so stay safe and we will wait as long as it takes for your safe return to the fields of play that are currently empty.

Next week, what we won’t miss if games don’t take place…