By Kieran Murphy
FOLLOWING the success of his recent virtual Tour of Carlow, Keith Heary of Supreme Fitness was overwhelmed by the response to the Length of the Coastline Challenge which he recently set.
The ordnance survey of Ireland measures the length of the coastline around Ireland at 3,171km so starting in Ballycastle and travelling around Ireland back to the northern town before heading due south to Carlow measures roughly 3,500kms.
Runners, walkers and cyclists chose their own route near their homes while others used spinning bikes and running machines at home 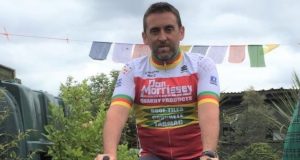 Beginning last Sunday week, Heary set his online followers a goal of six days to complete the distance as a group. However by last Monday evening, they had already completed well in excess of 3,000kms and it was clear the target was going to be easily achieved.
Keith changed tack and set down a goal of 10,000kms to be reached in six days. By Friday that goal was smashed as over 200 fitness enthusiasts (including 20 children) took part in the challenge. 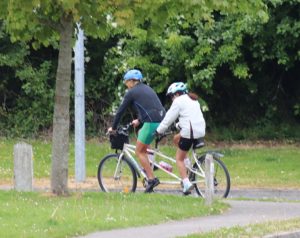 Paddy and Margaret Hayden on their tandem

Paddy and Margaret Hayden even took to the tandem to help bolster the kilometre count while Keith’s Facebook account was humming as people reported their numbers. In total, the group completed over 12,000kms in six days with Jessica Cassales winning a €50 voucher donated by Joov Ireland who specialise in muscle balm and have a base in Graiguecullen
The previous week, close to 100 of Heary’s followers completed 70,000 ab crunches in five days. He is not sure what kind of challenge he is going to set
next.
“Great credit is due to everyone for getting out and doing something. It is been a lot of hard work getting all the information together but it was well worth it and I really enjoyed doing it,” he said. “I think I may give everyone a break. I need one anyway.”
He is set to announce another three-day challenge for next weekend in the coming days.