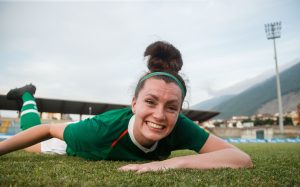 Name: Lauren Dwyer
Sport: Soccer
Club: Wexford Youths
Earliest sporting memory: I remember being in primary school in Bennekerry. We entered every competition, football, basketball etc. but never soccer. Myself and Aoibhin Webb had pleaded with Eddie Corcoran to enter us in a soccer competition. The only way they would let us enter was if we had a manager so I rang my Mam and Dad and asked would they help out Mr Corcoran. Of course, they said yes. We entered that tournament and kept progressing, we ended up winning the All Ireland Schools 5-a-side. 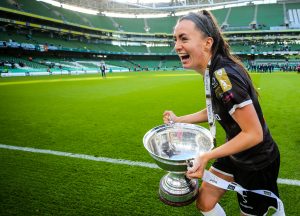 Memorable sporting moments: I have a good few but there’s definitely two or three that stand out. Soccer moments would be getting to the European Championships semi-finals with Ireland at under-19 level and my family was there supporting. I don’t think anything could top that for me. With Wexford Youths, winning the treble a few years ago was phenomenal. In Gaelic football I have to mention winning three-in-a-row senior titles with Bennekerry-Tinryland. That was special because I grew up playing with this team. It is great to be able to share moments like that with them.
Biggest influence on career: My dad, John, is at every match, sun, rain or snow and wouldn’t be afraid to tell me if I didn’t have the best of games but always supports me no matter what. He has always been there through the good days and the bad. My Mam, Mary, would have always pushed me to try and better myself and when I did athletics she was my coach. She always knew what I was capable of even if I didn’t believe it myself. I definitely wouldn’t be playing soccer or GAA if it wasn’t for either of my parents. Now that Mam has passed away I just want to make her and my family proud in every aspect of life because I know no matter what they will always look out for me.
Sporting Hero: English international soccer player Lucy Bronze.
Most difficult opponent: Katie McCabe when she used to play for Raheny and Shelbourne.
If I could turn back the clock: Losing the European under-19 semi-finals. We had the most difficult group and we were ranked eighth out of eight. We ended up beating Spain, Sweden and England. We were probably the biggest shock of the tournament. We were so hyped for the semi-final against Netherlands but nothing went our way and they went on to win the tournament. We were all heartbroken over that defeat.
Your favourite holiday: Skiing holiday a few years ago. A few of us went and had a brilliant time. I wasn’t great at skiing but it was definitely worth the bruises and the black eye afterwards.

Memories outside sport: I really enjoyed college, I got to meet some amazing people and had great memories in the four years I was there.
Favorite bar/restaurant: I love Teach Dolmain, or you can’t go wrong with a Chinese maybe from the Lotus.
Three people you would bring to dinner (not family): I would definitely bring Jessica Ennis. She won heptathlon Olympic and World Championship gold and I always looked up to her when I was younger. Second, I think I would like to invite Roy Keane. I want to hear his views on modern day soccer and he’d cut through, which would make it interesting. Finally, Tyson Fury. I think he’s an inspiration for a lot of people and would give an insight into how to overcome diversity.
What would be heaven for you: Growing women’s sports in Ireland and for teams and individuals to get the recognition and acknowledgement they deserve from everyone. Heaven would be to find a cure for the likes of cancer and other illnesses in the world.