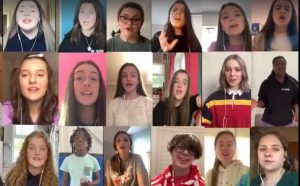 A GROUP of talented young Carlow people raised their voices and all our spirits with a wonderful virtual group performance.

Around 25 students from the Spotlight Stage School put their own take of Goo Goo Dolls’ ‘Better Days’.

The video has amassed almost 5,000 views in recent days and has been shared widely on social media.

The song itself is an ode to brighter days and new beginnings, which provides an uplifting message is these difficult times.

“The sentiment of it is fantastic and it’s about keeping in contact with the kids, keeping them positive and involved in stage school in some shape or form.”

Our Spotlight spin on the classic Better Days by the Goo Goo Dolls. At a time of uncertainty and fear , we wanted to spread some positivity and joy .“There’s a new world we face with better times ahead , replacing fear and hate with only love instead .Old friends embracing and new ones we’re making a universal feeling of happiness awaking . Because through all this what’s just now begun a new time of togetherness united as one “#BetterDays #SpotlightStageschool

Students at Spotlight Stage School have not met in person since early March and their annual show in Visual was also cancelled.

However, the school has innovated and has been holding Zoom classes and meet-ups with guest teachers, who hold classes through Instagram.

The students were more than up for the ‘Better Days’ challenge, although it was testing challenge to merge each individual video into one piece.

It’s been said that it’s a time for learning new skills and that’s been true for Stuart, who used Final Cut Pro software to put the video together.

It is hoped that the stage school may reopen in September after schools and colleges return.

The return of theatre performances nationally is a bit more uncertain, with details of social distancing and viability of producing a show still to be worked.

“You just to have hold your breath and stay safe,” said Stuart.