Community Games memories that will last a lifetime

By Mairéad Breen
MOVING through the month of May, this is normally a time when Carlow Community Games would be a hive of activity with areas all around the county involved in all kinds of pursuits.
This year has brought its own challenges, but it does offer us the opportunity to take a look back at years gone by. This week, we catch up with three people who are immersed in their own chosen sports, but for whom Community Games has lasting and fond memories. 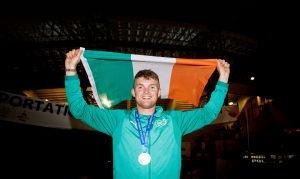 Marcus Lawlor
A bronze medallist in the 200m at the 2019 World University Games in Italy, Marcus has represented Ireland in European Championships at senior, U23, junior and youth level. He recalls that the Community Games always felt like a mini-Olympics and says that it contributed greatly to kickstarting his athletics career.
His earliest memories are competing for the Burrin area under the guidance of Peggy Furey. Their training venue was at IT Carlow’s main GAA pitch. The local athletics finals were held at the same venue and those placed first, second and third went forward to the county finals in Ardattin.
Marcus’s family moved to Ballycrogue when he was 12 years old and as Community Games rules dictate, this meant Marcus would now represent Tinryland/Bennekerry. Nothing changed about the thrill of competing against the local lads and trying to secure a spot in Ardattin.
“Everything about Ardattin was class,” Marcus says. “I mean we already felt like we had achieved something big by reaching the county athletics finals. The field was transformed into a sports arena with a marked track, flags and tents everywhere. Hundreds of children enjoying ourselves, eventually we were all rounded up and gathered into our appropriate groups to get ready for the all-important race.
“I really have many great memories, running through the ribbon at the end, hearing Liam Lyons over the microphone and anxiously waiting to get a ticket to be brought to the podium. But the best part was getting to the ice cream van before heading home.
“The national finals in Mosney were also memorable. I think running in bare feet up a bumpy grass track was a unique feature of Community Games. The final year that the games were held in Mosney was a special one for me. I won a gold medal in the 100m sprint.”
But the sweetest moment of all for Marcus came after the finals had been moved to the new venue of Athlone. Marcus picked up the gold medal in the 100m shortly after his sister Grace won the gold medal in the girls 100m. Carlow made the headlines in the national papers the following morning.
Marcus is eternally grateful to the volunteers who helped him over the years. If it wasn’t for them, who knows whether he would ever have progressed to the international athletics arena. 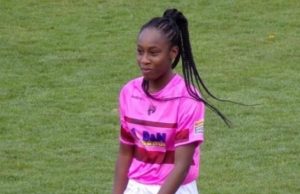 Blessing has been capped for Ireland in soccer at U16, U17 and U19 levels. She has recently been awarded a coveted scholarship to a Division 1 university in America where she will spend the next four years studying and playing soccer.
Blessing is 18-years-old. One is intrigued about the genesis of Blessing’s unmistakable soccer talent but even Blessing cannot quite explain it herself. She admits learning soccer skills from her dad as a child but only to the extent that any child might. Blessing credits Community Games with giving her a real competitive interest in sport. She began playing with Graiguecullen in Community Games aged 12.
“I played my first ever competitive match on my 12th birthday; a memory I will never forget,” she says.
Blessing participated in a number of sports from indoor soccer and futsal to basketball and athletics with Graiguecullen from U12 up to U15 level.
Her fondest memory was winning the U13 All-Ireland indoor soccer semi-final against Roscommon.
“We were 3-0 down with 10 minutes to go but as anyone from Graiguecullen will testify, we never lose our spirits before the last whistle is blown. We dug deep as a team and my team-mate Caoimhe Fitzpatrick scored two quick goals and I scored the equaliser to make it 3-3. Caoimhe then scored the winning goal. That very match is one that I hold very deeply in my heart. I remember it every time it seems like something isn’t going my way. I remind myself that anything is possible.”
“Thanks to Community Games I was able to express my love for soccer. At a time where my family was not in a stable financial position, it was very affordable to play with my local Graiguecullen team and eventually win an elusive All-Ireland final. For that I am grateful. Since then I have achieved many things I never would have thought possible in my wildest dreams.”
Blessing signed with Hanover Harps when she was 14 and she played with them until she was 16. She then signed for Wexford Youths which is still her club today. Blessing has a younger sister, Destiny, who attends Presentation College where she also plays soccer and basketball for the school.
“She might still surprise me and join me yet on the international stage,” says Blessing. 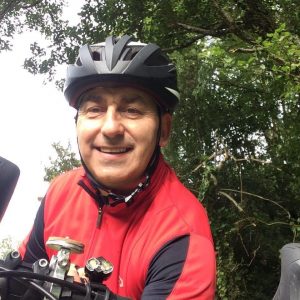 ‘It really isn’t about the winning, it is being a part of something’

Turlough has been manager of the Carlow senior football team for the last six years. Four years ago he published ‘Cycling South Leinster, Great Road Routes’ which consists of 30 scenic routes, many based in county Carlow. Turlough is also CEO of Carlow Voluntary Housing Association (Tinteán).
“It’s a long, long time since I took part in Community Games but when I look back from this distance I can still recall the excitement, the buzz and the anticipation of when everyone would start preparing,” he says.
“The name tells you all, ‘community’ and ‘games’. The success of Community Games is in its reach into every community in the country, urban and rural, rich and poor, we are all equal.
“In the town almost every street was represented and there was great pride in being on your area team and competing to see which area was best in each discipline.
“We didn’t need any great facilities, we didn’t need any great structures, it was simply local people looking after the kids of the area.
“This was pre-mobile phones, pre-social media. We had very little material wealth but were rich in neighbourliness and friendship, everyone knew everyone else on their street and in their area. They were vibrant communities. It’s ironic that it has taken Covid-19 for us to regain that sense of community again.
“We waited eagerly for the area sports to come around and to try and make the various teams in all sports. The county finals were the main aim for most, Butlins and the national finals were a dream but the big day for most was St Patrick’s College, on days that now seem to always have been scorching hot and sun burnt days. We were made to feel so special and important.
“Huge work went in every year to making the venue a mini-Olympic Stadium. The field was marked out into running lanes, the track roped off and the perimeter was lined with tall white flag poles bearing the flags of exotic countries from around the world. There was the podium and the medal presentations, ‘Mise Éire’ blasting out on the PA, it really was a spectacle.
“After the county finals there were the Leinster competitions and they took us to far flung places like Dundalk and Bray at a time when we wouldn’t have ventured very far from home.
“I took part in various years in a myriad of sports from football, hurling, basketball, cycling, 1500 metres and chess. I actually represented Carlow in chess but got an early awakening in round one, before I knew what had happened it was check mate, over and out!
“They were great days, ice cream and chip vans, huge crowds and just honest to God fun are part of a kaleidoscope of memories when I look back at Community Games in the early 1970s.
“When I look back now after a lifetime involvement in sport I am greatly indebted to my own family, the clubs of Carlow town and the Community Games volunteers for inculcating in me a love of sport.
“In these unique times we find ourselves, we now appreciate just how important sport is to all of us. It really isn’t about the winning, it is being a part of something, striving to be the best you can be, daring to dream, it’s the sense of occasion, the build up to the big games, the conversations, supporting our team and the sense of communities at play.”