Scott enjoying a change of pace 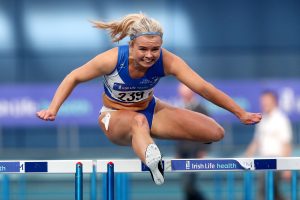 By John Foley
FOR so many sports people, the last couple of months have been an exercise in getting back to basics; stripping back the complex and rigid regimes that become a normal part of training and competing at the top level.
For Molly Scott, the recent restrictions on movement have certainly required a readjustment, but it has also been an opportunity to reset and approach her training from a different angle. And a welcome one at that.
The Hacketstown sprinter may not have access to all the facilities she has become accustomed to in recent years. But that doesn’t mean she has lost out. In fact it’s quite the contrary.
“I’m actually training the best I ever have over the past couple of weeks,” she says. “I’ve found a new work ethic. I’ve been able to think more clearly, I can focus on technique and some different areas. So I feel I will never go back to the way I trained before. I realise the work capacity I can do in a day, what I can get done if I’m not too distracted by other things.”
The return to more basic training facilities is something she has embraced.
“The only thing I can’t do is hurdle on a track and I can’t sprint as fast as I would on a track. And they are big things because at the end of the day that’s what I do; I race over hurdles on a track. But I have a strip of grass that I hurdle on.
“I’ve definitely had to adjust to it because grass is so soft. It gives nothing back, whereas a hard track generates force back through your body so you’re running a lot faster.”
But the essential details remain the same. Molly’s mother Deirdre has always been her closest confidant and trainer.
“I’ve been training on my own since I was 12 and my Mam has been my coach since I was 12. And I’ve trained in rural areas for years, so in that regard things haven’t changed. I’ve been quite lucky.”
The home gym facilities have never been so important and in recent weeks she has juggled training requirements with college duties. Molly is studying law at IT Carlow where she also had to readjust to new procedures for exams and assignments. She’s delighted that is also coming to an end.
“I’ve been staying in touch with my friends and we’ve all being doing exams,” she says. “We have a group chat so it’s usually everyone stressing about how hard it is. I just have one more assignment which is due on the 21st and then I’m free!”
This summer’s athletics calendar has long since been decimated with the Olympics the biggest casualty, forcing sportspeople around the world to put their plans on hold.
However, Molly says she is relatively fortunate that she won’t be greatly impacted this year.
“I wouldn’t have made the Olympics if it was this summer, but next year I have a chance,” she says. “It will be very hard to make it, even with another year, but it does give me an opportunity.
“The European Championships have been cancelled and they were meant to be at the end of the summer in Paris. Everyone wanted that one to stay, just holding on to one event. But unfortunately they were cancelled.
“But I think I would be just as motivated, even if there wasn’t a race for a year. I don’t really struggle with motivation.”
Athletics Ireland has been among the first sporting bodies to allow clubs to return to action from yesterday, in line with the most recent easing of restrictions, and Molly hopes their plans for a truncated summer schedule will come to pass.
“I think they’re planning to do an outdoor national championship, I presume in Santry in August, and I’ve also heard rumours about open graded meets at night time in maybe July or August. So there definitely will be competitions if restrictions are eased correctly.”
In the meantime, it’s all about controlling the things she can control. She has been working with sports psychologist Jessie Barr, herself a former Olympian, on different aspects of elite performance. “Your body can be fit, but your mind needs to be strong too,” she says.
She had been brushing up on her strength and conditioning knowledge too, adding another piece of the jigsaw.
Next year, assuming the world is a healthy place, will be busy with a pack schedule of big championships including European U23s, European and World Indoors, World University Games and the Olympics. There’s plenty of action just over the horizon. But she knows she has to bide her time.
“I try not to be too strict on things because this is a pandemic. If you get caught up in trying to be perfect about training, sleeping and everything, it’s just going to amount to a lot of stress I think.”
Wise words indeed.